If any further evidence were needed that the commodities boom is over, management changes at some of the world’s biggest resources companies seals the deal. 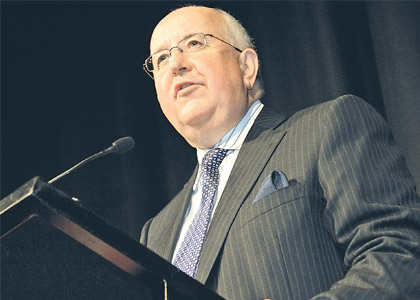 If any further evidence were needed that the commodities boom is over, management changes at some of the world’s biggest resources companies seals the deal.

WHEN a business hangs out an ‘under new management’ sign it doesn’t necessarily mean good news for everyone, as Western Australia is about to discover at the hands of the new boys in charge of the world’s biggest mining companies.

Cost cutting - code for job shedding and plant closures - is replacing expansion and job creation as the primary driver at BHP Billiton, Rio Tinto, Xstrata/Glencore and Anglo American, and trickling down to smaller operations.

The decision last week by mineral sands miner Iluka Resources to cut 65 jobs when it mothballs its Eneabba mine in April, and 200 jobs across all its operations, was an early reminder of what happens when the focus of a business shifts from expansion to capital preservation and loss prevention.

Norilsk Nickel’s warning that it might close its Lake Johnston mine, shedding 180 jobs in the process, was another reminder that the boom in commodity prices has passed, leaving Australia as a high-cost country in a low-price world.

Tempting as it might be to say that Iluka and Norilsk are exceptional cases because of their focus on a handful of minerals such as nickel (in the case of Norilsk) and ilmen-ite, rutile and zircon (in the case of Iluka), that is not the situation; instead, there is a force other than commodity prices driving what is a fundamental shift in how resources companies are behaving.

Shareholder demands for a greater share of a company’s profits -through increased dividends and capital management such as share buybacks - is also playing a bigger role in management decisions.

What the combination of lower commodity prices, an uncertain global economic outlook, and shareholder demands means for regions such as WA that rely on resource development is cutbacks, postponed expansion plans and delayed mine developments.

Three men, and they’re not politicians, will play an enormously important role in determining what happens to the WA economy over the next few years because they will decide whether projects proceed or are cancelled. The men with the state’s future in their hands are:

• Sam Walsh, the new chief executive of Rio Tinto; and

Mr Mackenzie, as the excitement of his appointment dies down, has inherited management control of a business that has just reported a 43 per cent fall in profit for the halfyear to December 31. And while that decline is largely a result of comparing a period of strong revenue flows in 2011 with the tighter profit margins of 2012, it was a result that reminded everyone the best of the boom is over.

The outer harbour is a project that never happened, like the expansion of the Olympic Dam copper and uranium mine in South Australia. But the nickel and alumina businesses are operating, and by writing them down BHP Billiton is sending a powerful signal that (a) it obviously no longer values them highly and (b) once written down their sale or closure becomes that much easier, in precisely the same way the Ravensthorpe nickel business was first written down, closed and sold.

Mr Walsh at Rio Tinto, despite his close affinity with WA, will be under the same pressure of shareholder demands to boost the company’s profits and shareholder rewards. And while his former focus on the iron ore division is safe, for now, the same cannot be said for Rio Tinto’s diamond operations, which include the Argyle mine, and Dampier Salt.

Mr Coleman, who is riding high after Woodside reported a strong profit for 2012, is under precisely the same pressures as shareholders demand far greater attention to cost management than project expansion. His biggest challenge this year will be whether to mothball the proposed James Price Point gas processing hub in the Kimberley.

Politically, a decision to not proceed with the onshore gas hub will be criticised and praised in equal measure. Not so at an investor level, where there will be nothing but approval because the likely switch from onshore to an offshore floating LNG barge will dramatically cut the cost of developing the gas reserves in the Browse Basin.

economy) to a period of cost cutting

and austerity, which are the overriding instructions issued to the new management teams at BHP Billiton, Rio Tinto and other resources companies.

To spell it out, consider a few comments from fund managers after BHP Billiton announced Mr Mackenzie’s appointment and first-half profit fall.

“The previous changing of the guard in 2006-07 heralded a significant period of merger and acquisition (activity) in the sector, while this change-over has been characterised by impairment charges and an era of much more stringent capital management, and a focus on shareholder returns.” Tim Clark, Deutsche Bank

“It’s about getting the best out of the existing base instead of adding to it.” Tim Schroeders, Pengana Capital

“This is a period when the big companies will focus on operational efficiencies, keeping their costs under control.” Sir Rod Eddington

Boiled down, there is more than a management change under way at the major resources companies operating in WA. There is a shift in focus from project development and expansion, which has been good for the local economy, to a far greater emphasis on returning cash to shareholders and most of them do not live in WA.

THE people most likely to be hurt by the change in focus at resources companies are unskilled workers, a result of cost cutting and another emerging trend of even the most humble of jobs going to workers with formal qualifications.

In the US, where management trends often start, university degrees are now treated as high school graduation certificates with so-called ‘degree inflation’ pushing unskilled workers further down the pecking order, or out the door.

“Management is the art of getting three men to do three men’s work.”