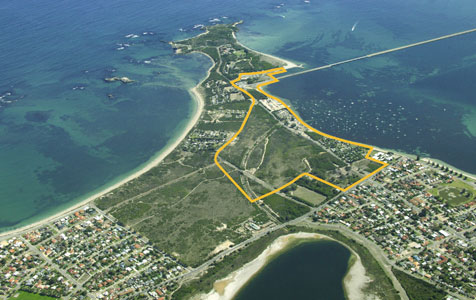 Plans for a 500-pen marina near Rockingham have passed the scrutiny of the state’s environmental watchdog, but the project will have to meet some of the strictest coastal development conditions if it is to proceed.

The development area covers 75 hectares between the Garden Island causeway and Palm Beach, some of which is currently being used by the Mangles Bay yacht club.

Hospitality facilities such as cafes, restaurants and holiday accommodation, as well as a marine science education centre, round out the proposal.

The marina would provide pens for up to 500 boats, while the plan also flags opening up the beachfront from the Garden Island causeway along Mangles Bay for public access.

Around $5 million will be spent on remediating and enhancing Cape Peron.

A total of 11 strict conditions have been recommended by the EPA, including preparing a marine environmental quality management plan, limiting serious damage to seagrass communities, and ceasing construction during peak dolphin calving periods.

Observers will also ensure construction will not go on if any marine mammals or penguins are within 300 metres of the area.

Monitoring and management plans to protect threatened ecological communities around Lake Richmond will also be required.

EPA chairman Paul Vogel said the regulator’s assessment had resulted in Cedar Woods and LandCorp improving the marina proposal, including re-designing the marina entrance and reducing the depth of the navigation channel to reduce seagrass loss.

“The EPA has recommended the proponent replant twice the area of seagrass lost by the proposal within six years of construction with 75 per cent cover to be achieved after the commencement of construction,” Dr Vogel said.

“The proponent will also be required to rehabilitate 20 hectares of native vegetation within the Rockingham Lakes Regional Park.”

Federal environmental approval is also required for the project to commence.

"The project will fill a need which has existed for the past 40 years and provide local residents between Mandurah and Fremantle with improved boating facilities and a secure marina with comprehensive support services," Mr Duplock said in a statement.

"The project has been planned to retain and improve the environmental values of the surrounding area."