SPECIAL REPORT: There has been a major shift in business influence in WA amid waning international investment and, with two elections on the way, there is a prospect of even bigger changes in political influence. Click through to see our listing of WA's most infliential leaders in politics and business. 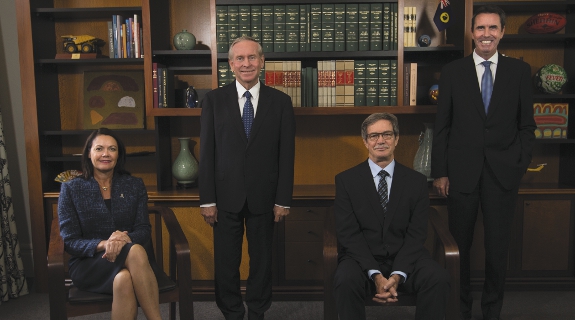 There has been a major shift in business influence in WA amid waning international investment and, with two elections on the way, there is a prospect of even bigger changes in political influence. 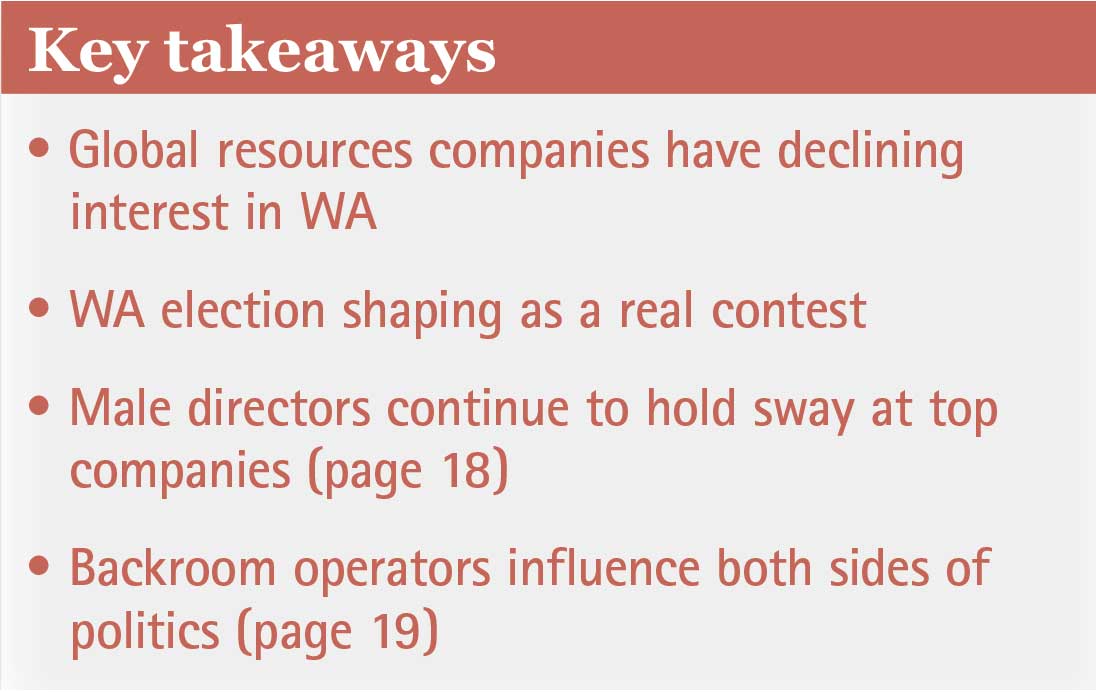 Mr Wilson’s job was abolished, with the iron ore business – which contributed half of BHP’s underlying profit last year – now run from Melbourne.

The BHP shuffle was followed this month by the surprise retirement of Rio Tinto chief executive Sam Walsh, who had headed its iron ore business from Perth before moving to London to take up the top job in 2013.

His successor will be Jean-Sebastien Jacques, who was picked ahead of current iron ore boss Andrew Harding.

The theme is that Perth and WA aren’t quite as important as they used to be.

This state is still a major operational hub and profit generator, but it’s no longer the place where global companies are seeking to invest billions of dollars in growth projects.

A similar theme is emerging in the oil and gas sector, where global players Chevron, Inpex, and Shell are completing major LNG projects.

Chevron still has about 14,000 staff and contractors at its Gorgon and Wheatstone projects, indicating the large amount of construction work that lies ahead.

The scale of these projects means Chevron in particular will be one of WA’s most important companies for decades to come.

As with the iron ore sector, however, the big strategic decisions have been taken, the investments have been committed, and the focus will shift increasingly to operations. 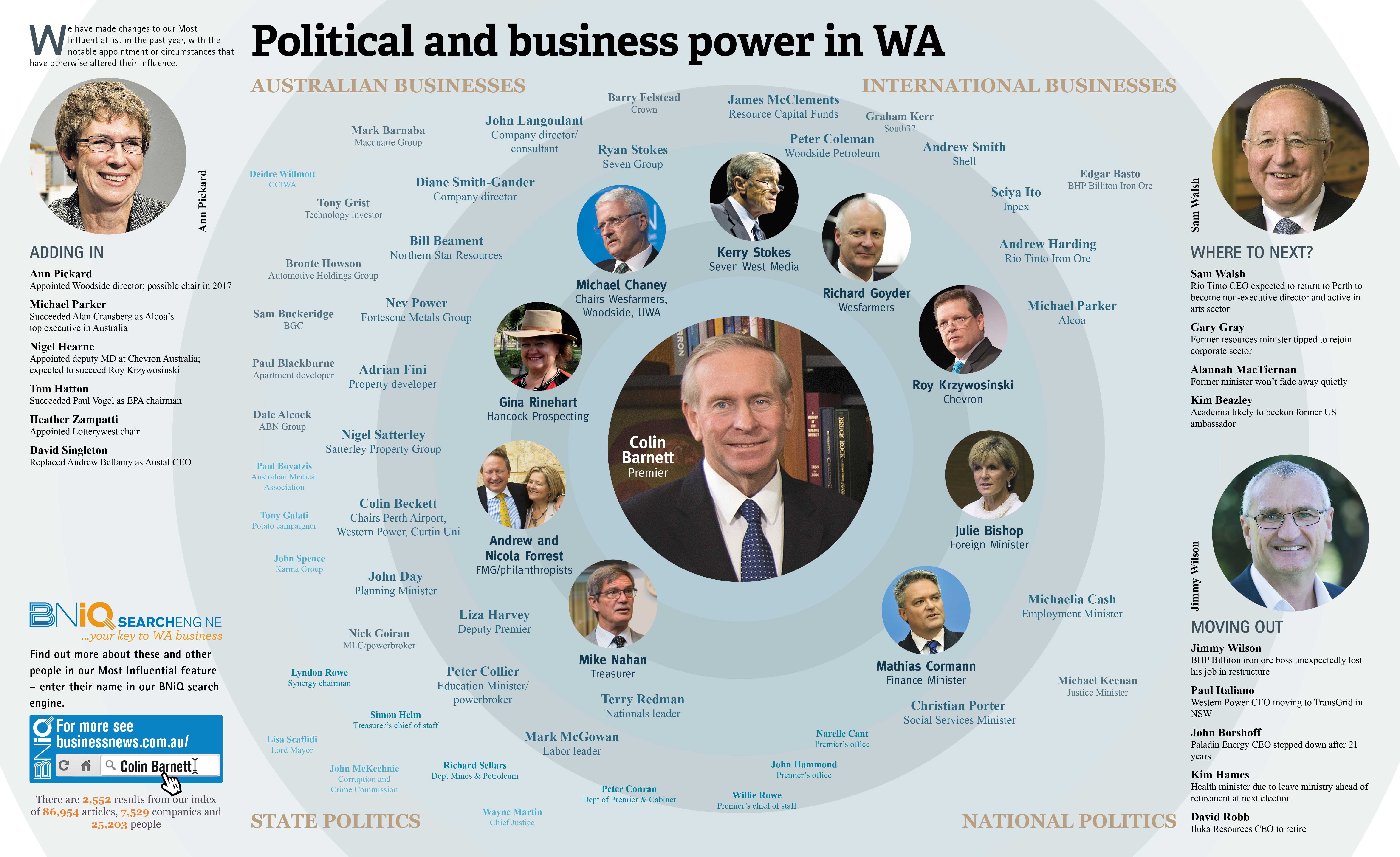 With a federal election due this year, most likely in July, and a state election in March 2017 there is no certainty that current political heavyweights will retain their positions for long.

The heaviest of the hitters are senior ministers Mathias Cormann and Julie Bishop, who are highly influential in both Canberra and the Liberal Party WA.

With Michael Keenan holding the justice portfolio, WA has an unusually strong representation in the federal ministry – though that did not help much when it comes to dealing with issues such as WA’s low share of GST grants.

It’s in state politics where change seems more likely, judging by the ReachTEL poll of 1,248 voters published earlier this month.

The poll showed Labor leader Mark McGowan was preferred premier, with 61 per cent support to Premier Colin Barnett’s 39 per cent.

It also showed Labor holds a big lead over the Liberals and Nationals, with a two-party preferred vote of 56 per cent to 44 per cent.

History and other opinion polls tell us Labor is unlikely to sustain that kind of support in an election, but it does signal Labor has a very serious chance of winning government.

That kind of polling will invite closer scrutiny of Mr McGowan’s team and how it compares with Mr Barnett’s.

For all the challenges and setbacks he has experienced since winning a second term in 2013, Mr Barnett retains firm control of the state government.

That means the inner circle around the premier, including long-serving advisers Narelle Cant and John Hammond, and chief of staff Willie Rowe, has a big bearing on the government.

The only minister who comes close to the premier in terms of policy influence is Treasurer and Energy Minister Mike Nahan, who has championed privatisation of government assets.

Mr Barnett’s recent change of heart on Western Power was a stark indicator of the government’s changing fortunes (he consistently opposed its sale until admitting the government had run out of options to address its mounting debt).

Key members of the premier’s ministerial team (pictured on the cover of this edition alongside Dr Nahan) include Deputy Premier Liza Harvey, who will be watched closely, and Education Minister Peter Collier, who is also a Liberty Party powerbroker.

Senior ministers such as John Day will also have a bearing on the government’s fortunes.

The task facing Mr Barnett has been complicated by the Nationals, including party leader Terry Redman, who have set out to differentiate themselves from the Liberals on key policy issues such as privatisation.

Mr Barnett’s cause is not helped when critics on both sides of the political divide find common cause, such as in health.

The construction of major new facilities such as Fiona Stanley Hospital is one of Mr Barnett’s proudest achievements, yet the government is consistently under attack from both the Australian Medical Association, led by executive director Paul Boyatsis, and trade union United Voice, which is opposed to the use of private contractors like Serco.

If Labor were successful at the next election, the key ministers sitting around the cabinet table with Mr McGowan would be the likes of Ben Wyatt, Rita Saffioti and Roger Cook.

However, many will question the level of influence to be wielded by the union leaders who control Labor’s factions (see page 19).

Mr McGowan is already staunchly opposed to privatisation, and would find it hard to maintain the public service job cuts and wage restraint Dr Nahan favours, which leaves big doubts over Labor’s capacity to repair the fiscal mess it would inherit.

A change of government would likely trigger movement in the bureaucracy, starting with the state’s most influential public servant, Department of Premier and Cabinet boss Peter Conran, who was recruited in 2008 after the Liberals won power in WA.

It’s worth noting that, when Business News spoke to business executives, lobbyists and others for this feature, most struggled to name public servants who were making a mark.

The exception was Department of Mines and Petroleum boss Richard Sellars, who was widely considered to have done an outstanding job making WA a more attractive investment destination.

The end of the resources investment boom, and the waning influence of international resources giants, will put more weight on local businesses.

As chairman of the state’s two largest companies and chancellor of the University of Western Australia, few people carry the same influence as Michael Chaney.

However, it’s instructive to look at the varied fortunes of the companies he chairs.

Collapsing oil prices have battered Woodside Petroleum and chief executive Peter Coleman is struggling to find growth options, with the latest setback being its decision to halt work on the Browse LNG project.

That comes after its failed takeover tilt at Papua New Guinea-focused Oil Search and its failure to progress an LNG project off the Israeli coast.

One of the few bright lights in mining is gold, and that makes industry leaders including Northern Star Resources boss, Bill Beament, more influential.

This Special Report includes an analysis of Perth's top company directors, and how its still tough at the top for women, and profiles some of the powerful backroom operators in WA politics, such as Liberal MLC Nick Goiran and trade unionist Carolyn Smith.