Some bold vision is needed to create a 50-year housing and transport plan for Perth and surrounds. 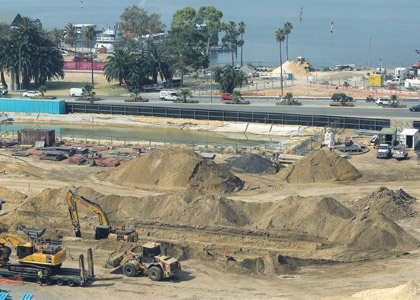 ACTION: The Elizabeth Quay project may not satisfy everybody, but something had to be done after decades of failed proposals and political timidity. Photo: Bohdan Warchomij

Some bold vision is needed to create a 50-year housing and transport plan for Perth and surrounds.

EVERY time I have a conversation about land development with the experts I hear the same thing - the time it takes to make land available has blown-out due to the many forms of regulation that impede the process and ultimately cost consumers.

In the not-too-distant past it would take 50-100 days to get a subdivision approved; these days it is three years if you are lucky, and often up to five.

Those delays are costly. There is the direct cost of hiring consultants to tick every box and the indirect cost of holding an unproductive asset for so long.

There is also the opportunity cost of being unable to meet demand when it appears. Developers need to be three to five years ahead of the curve to meet the market. Who has that kind of foresight?

Only those with incredible patience and the wealth to absorb the medium-term costs can play in this game. It is yet another example of how regulation plays into the hands of larger players in any industry. The nimbleness of small land developers is outweighed by the sheer frustration of finding their way through bureaucratic obstacles.

Much of the regulation land developers endure - creating the costs that are passed onto consumers who have found housing increasingly unaffordable - is based on the concept of ruling out the remote possibility of something going wrong.

While even I admit that you can’t allow the bulldozers to clear every scrap of bush and fill in every swamp just to create cheap suburbia, there has to be a better form of control than simply grinding things to a halt.

My view is the state government ought to create another 50-year outline for the metropolitan area, such as the 1955 Stephenson-Hepburn plan, which clearly outlined where suburbia would grow and the various infrastructure needs that would allow that to happen.

That plan worked well until its last few years, when politicians started tinkering with it to suit their electioneering. For example, we have lost the proposed Stephenson highway route north from Fremantle through the western suburbs and the eastern bypass that was meant to run southeast out of the port. Both routes were envisaged to relieve pressure on older roads as the city grew.

Instead, these relief valves were cut off by politicians responding to the demands of nimbys, who chose to ignore the well-known plans when they bought their homes.

Reports like Directions 2031 are often held up as alternatives to a new Stephenson-Hepburn plan; but these are vague concepts rather than prescriptive outlines on a map that could be used to define the city’s growth for the next 50 years.

It might sound all very Soviet-style, or ‘Canberrean’, but it worked for Perth and has delivered a very functional city.

Without such a plan we have a piecemeal approach where every development proposal seems to have to take account of all the possibilities, as if no-one ever thought of turning a farm at the edge of suburbia into housing.

It is time the government invested in this plan. The result will be certainty for investors and developers, and cheaper housing for people in the future.

IT is easy to take a swipe at the state government for the big projects it has embarked upon to make Perth a better place.

Premier Colin Barnett is being constantly criticised for his efforts to get the football stadium and waterfront developments happening.

In fact, there seems to be a small groundswell of anti-Barnett sentiment in his home turf of the western suburbs where the real opposition seems to be those disgruntled with change, including the self-appointed City Gatekeepers, who are opposed to the Elizabeth Quay development.

I’m sure that the waterfront development won’t be perfect. But in the end, after decades of procrastination and many different abandoned proposals, something had to be done. The supreme example of such delay is the CityLink project, including the sinking of the railway, which has been on the cards for 100 years.

Over at Burswood, Mr Barnett is vulnerable to attack over a deal done with the Packer empire to provide discounted access to land for the expansion of its hotel complex. I agree that, on the face of it, the arrangement does seem very favourable to James Packer’s business (already the major beneficiary of the decision to locate the sports stadium at Burswood), but I will presume that everything is above board.

Personally, I prefer the Subiaco option for the stadium, but that is for selfish reasons. In future years the move to Burswood, if it happens, will look smart. It will offer what the MCG does today for Melbourne.

It will, however, cost more than the Subiaco option, so we need to be prepared for the implications of that additional expenditure.

In the interim, this city needs hotels and, from what I understand, such accommodation only gets built where land is obtained more cheaply than it would if it were to be used for other purposes. Usually that means some form of government loss, commonly by giving up Crown land. Inevitably, such hotels are owned and run by large and often multinational groups.

So while the arrangement with Mr Packer might look like a sweetheart deal, my gut feeling is that it simply takes such compromises to get hotels built.

At the end of the day, the Barnett government has sought to remove obstacles and get things moving on these important, albeit imperfect, developments.

They might look like pet projects when viewed from the political prism of Mr Barnett’s re-election campaign, but that overlooks the fact that they are long overdue and will be a big economic catalyst. Already I have spoken to major developers who see Perth’s CBD as one of the few bright spots in an otherwise lacklustre national market.

At the end of the decade, such development will have cemented Perth’s place as an important capital and we will wonder why there was such a fuss about the change.

The caveat on that thought is: how do we pay for it?

Both sides of politics need to rein in recurrent spending so that we can comfortably enjoy these new assets without pushing huge debt issues into the future.