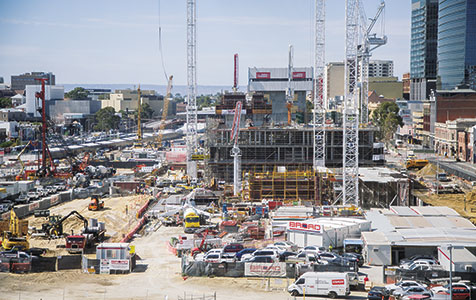 Opportunities abound for major construction companies, but their biggest challenge is winning work in an ultra-competitive industry.

The state’s major builders appear unfazed to be operating in what’s considered among Western Australia’s most competitive and closely monitored business sectors.

“It’s a competitive market, it always has been and it always will be, that’s just the lot of life that we have as builders,” Brookfield Multiplex regional managing director Chris Palandri told Business News.

“Construction companies generally operate on relatively low margins, compared to other industries, so I’d say the current environment isn’t markedly different from the environment we (normally) exist in.”

Mr Palandri said the company’s biggest challenge was setting itself apart from its competitors to win contracts.

“It’s a tight-margin business, there are a lot of competing forces that take place when delivering a project, so being able to deliver buildings on time and on budget with no defects is critical to us in terms of maintaining margin,” he said.

Probuild WA managing director Eric Meyerowitz said the levels of competitiveness in parts of the construction market could only be described as extreme.

Mr Meyerowitz said Probuild had won more than $130 million in new works since the start of 2014, including a $50 million contract to construct Kings Square Tower 3, and an $80 million contract for the expansion of Stockland’s Baldivis shopping centre.

“The opportunities are out there, and you must deal with the market forces that are there at the time,” Mr Meyerowitz said.

“Everyone wants to be the builder of choice, but it comes only from hard work and doing all the right things by your client, delivering high-quality work, on budget and on time.

“That’s a very big part of our day – making sure that that happens.”

“To win work it is important to work with clients to understand their needs and ensure you are pricing the job with a very in-depth understanding of these needs,” Mr Marshall said.

“Clients don’t want add-ons that offer no value; they want the best product at a competitive price with a construction methodology that offers cost and time savings.”

Despite the competition and tight profit margins, WA’s major builders were upbeat when discussing the level of work available in the market.

The level of activity has been reflected in a 10.6 per cent rise in the state’s construction workforce over the past year, according to the Construction Training Council.

The council said there were 134,410 people working in the construction sector as of February 2014, making up more than 10 per cent of the overall WA workforce.

Georgiou Group chief executive John Georgiou, whose company works across a range of industry segments, said the market had experienced a large decline in resources-related construction, with a big shift towards government and private investment and residential development.

Broad Construction managing director Dean Goodliffe agreed, saying a range of solid opportunities was set to emerge over the next 12-24 months.

“For us, we’ve got a good portfolio of commercial construction at Kings Square, we’re seeing the social infrastructure coming through, projects like the museum and the stadium are coming up which will be fantastic,” Mr Goodliffe said.

“Residential and hotels construction is strong too. Perth is in desperate need of a wider portfolio of accommodation, so that would be something that we’re interested in as well.”

Contrary to recent history, where the majority of major construction works were located within the confines of the Perth CBD, the biggest value currently being built are located in the suburbs.

The largest job currently under way, following the recent completion of the $2 billion Fiona Stanley Hospital by Brookfield Multiplex, is the $1.17 billion new Children’s Hospital in Nedlands, which is being built by John Holland.

The children’s hospital is on target for completion in late 2015.

Next on the list is the $750 million terminals expansion and redevelopment currently under way at Perth Airport.

The redevelopment is being conducted in phases, with Broad Construction contracted for terminal expansion works and Built Environs expanding the international departures facility, as well as building a new domestic pier.

The first phase is scheduled to be complete by next year.

In the commercial sector, the largest project significantly under way is the $532 million Kings Square precinct on Wellington Street, which is being developed jointly by Leighton Holdings and Dexus Office Properties on behalf of landowner Seven Group Holdings.

Kings Square project director, Leighton’s Bradley Norris, said the construction of all four towers at the same time was a major achievement.

“However the biggest challenge is the logistics of site access and coordination of works on site,” Mr Norris told Business News.

“This takes a considerable effort from all parties to understand each primary contractor’s program and methodology, with clear communication the key for success.”

The Kings Square development is the first of four major precincts set to emerge in Perth’s CBD over the next few years.

Across the city at the Old Treasury Building, builders Mirvac Construction, Built, and Northerly are constructing a 21-storey $280 million office tower, a 48-room six-star hotel, and a $25 million redevelopment of the Perth Trustees building at 565 Hay Street, respectively.

There are also plans in the works for a six-storey, $21.5 million song school and office building at the adjacent former site of the Playhouse Theatre, while Doric is building a $33 million library for the City of Perth at the precinct.

Mirvac Group chief executive of development and group strategy, Brett Draffen, said the opportunity to construct the office tower at the precinct arose only when the projects were combined.

“It was only all of those uses coming together that allowed that precinct to be unlocked,” Mr Draffen told Business News.

“It’s quite often very hard to do anything just on a building-by-building basis.

“Both the state government and the City of Perth should take that credit, because if you think about it, cities have to grow significantly through urban renewal and urban renewal projects are typically complex sites that have generally had a previous use that you have got to change.

“They tend to be contentious sometimes to the community and there needs to be a strong vision sold; that’s really where the value is derived.”

Perhaps the most contentious precinct currently emerging in the city is Elizabeth Quay, which is expected to provide a host of major works opportunities.

Already confirmed to be constructed at the site once Broad Construction completes its $200 million inlet and public plaza works next year is a commercial tower, which could be built up to 36 storeys, to become the Perth headquarters of international oil and gas giant Chevron.

Hong Kong’s Far East Corporation has also purchased land at Elizabeth Quay, and recently unveiled plans for a $350 million, 204-room Ritz-Carlton hotel and two apartment towers. A builder is yet to be announced for the project.

The fourth potential precinct to emerge is BGC’s Heritage Precinct, which will comprise a 22-storey office tower as well as a five-star Westin Hotel, at the site of the former FESA headquarters on Hay Street.

Along with the Ritz-Carlton and Westin properties, international chain Hilton will launch its DoubleTree by Hilton brand in Perth with two hotels, one on Barrack Square and the other in Fremantle, while BGC will partner with Aloft Hotels to construct at 224-room hotel in Rivervale.

In total, Business News research has found there are slightly less than 1,800 hotel rooms confirmed to be built across eight projects before 2020, but the Australian Hotels Association said that number could grow to more than 4,000 if other projects in the planning pipeline go ahead.

The AHA estimated the hotel development pipeline to be worth more than $3 billion, which is likely to provide significant additional opportunity for major construction firms.

“That market is obviously taking a lot of pressure and needs to expand quickly,” Mr Meyerowitz said.

Perth’s shortage of affordable housing is also providing a boon for construction companies in the form of the widespread rollout of high-value apartment projects.

The value of residential construction work increased by nearly 17 per cent over the year to December 31, to reach $7.16 billion, the Construction Training Council said.

Developer Finbar’s close relationship with Hanssen, which was formalised earlier this year with an exclusivity arrangement, has resulted in the construction firm currently building $464 million worth of apartment developments.

Another construction firm with a preferred contractor arrangement with a developer is PACT Construction, which is the builder of choice for boutique developer Qube Property Group.

Construction works by PACT are under way on Qube’s Wexford and Urban on Cambridge apartment projects, which have a combined contract value of $42.5 million.

The builder has also recently completed two commercial developments for Qube, and combined with the under-construction 999 Hay Street, those works are worth about $87 million.

Also, Doric was recently selected as the preferred builder for Limnios Group’s $160 million Park on Swan apartment project in Rivervale.

Probuild’s Mr Meyerowitz said the acceptance of apartment living by Perth homebuyers had led to a massive stimulation of the residential construction market.

The company recently completed the $23 million Origin Apartments on Goodwood Parade in Burswood.

“Apartment living is the one big change, increasing the density in certain areas to us represents a change in thinking,” Mr Meyerowitz said.

“If you think of the Esplanade from William Street to Bennett Street, that was where all the high rise was.

“Now the centre of gravity of that market is spreading elsewhere.”

While the current level of work for major construction companies is solid, there is also a significant pipeline of upcoming work.

However the big-ticket item is the contract to build the $1 billion, 60,000-seat Perth Stadium at Burswood.

The state government has whittled down the contenders to three consortia – Westadium, Evolution, and Confidem, each of which has considerable experience in stadium construction worldwide.

The third consortium in contention is Confidem, which is led by John Holland, and includes Capella Capital and Spotless Facilities Services.

Premier Colin Barnett said in late March the successful consortium and its design would be revealed mid-year, but that hasn’t stopped considerable speculation swirling that a contract announcement is imminent.

The upcoming $430 million new Western Australian Museum project has also given construction companies optimism that the strong activity levels are set to continue.

“There are a lot of infrastructure projects in the pipeline, even though a lot of them hinge on state spending,” Mr Goodliffe said.

“We’re involved with Elizabeth Quay and that obviously provides a whole host of opportunities that are good for the city and you’ve got major developments in the city that will keep the likes of Broad and other companies busy for a good few years.”