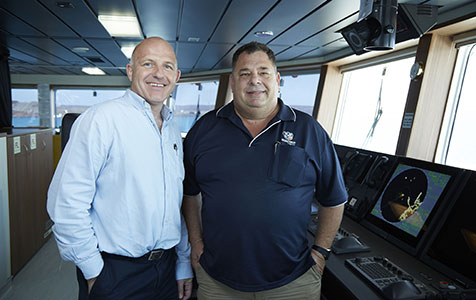 British media reported the business, which has bases in Devon and Cornwall, recently reported an underlying profit of £4 million and its fleet of vessels were worth £30 million.

Bhagwan primarily services the oil and gas industry and the deal brings its total number of vessels in Australia and the UK to more than 170 and staff numbers to 850.

When Bhagwan Marine won the Business News Rising Star award last year it had 70 vessels and 450 staff in WA.

Shortly after winning the award, Business News exclusively reported it acquired Darwin-based business Workboats Northern Australia, including 180 staff and more than 30 vessels for an undisclosed amount.

In May, it bought Queensland business MDT Maritime, including 22 vessels and 170 people working in Hay Point, south of Mackay, and Brisbane.

Bhagwan managing director Loui Kannikoski said the company had been eyeing an international acquisition for some time and MTS was the perfect fit.

“MTS managing director Jon Parslow will be staying on in his present role and I am very happy to say that he is now a shareholder in the parent company. Jon will also be heading up our push into the international market,” MrKannikoski said in a statement.

“We’re making moves at the moment to look at New South Wales and Victoria, South Australia and also further afield to (Papua) New Guinea and New Zealand,” he said.

Announcement of the British acquisition comes days after Bhagwan officially launched a $27 million “game changing” vessel based in Dampier.

At the official launch on Friday of the 57-metre remotely operated vehicle and dive support vessel, Mr Kannikoski told Business News the unique custom vessel could be the first of possibly three.

Bhagwan worked closely with Neptune Marine Services to build the vessel and Bhagwan, which is the majority owner, has contracted out the Dryden to Apache Corporation for at least 150 days a year.

The majority of the 40 employees on board will come from Bhagwan while Neptune will provide dive, ROV and survey staff, due to begin their first manned dives next month.

Neptune chief executive Robin King told Business News the Dryden would allow it to chase work, especially months in advance that it would have been difficult to secure vessels for earlier.

"It's very difficult to get a vessel owner to commit nine months in advance for two months work, (now) we can decide with Bhagwan that we can take that and bid for those sorts of jobs," Mr King said.

"It allows us to be more in control of our own destiny."

Apache will initially use the vessel near Varanus Island, where its shallow draft and dynamic positioning will allow the boat to forgo anchors and carefully position itself over underwater infrastructure such as pipelines without touching them while staff conduct subsea maintenance.

Mr Kannikoski said the boat was unique because infrastructure was built in, allowing more free space on the boat for extra equipment and reducing demobilization and mobilization time when going to and from jobs to save clients money.

For Bhagwan it means it can quickly maneuver to new jobs and provide a suite of services more efficiently than others.

“If we can save those costs, everybody wins,” Mr Kannikoski said.

“When all of the people we work for see the benefits of the Dryden our hope is of course to build another one or two for the industry, and one of the big things for the Dryden is that it’s based in Australia,” Mr Kannikoski said.

That means its mobilisation and demobilisation costs are considerably less than similar boats of its class that have to move from Europe or Asia.

Bhagwan in partnership with Neptune approached Apache with the idea after coming up with it about seven years ago.

“We’ve had a 14-year history with Apache that has allowed us to be very innovative in the vessels we’ve supplied to them and this is probably the jewel in the crown as far as that’s concerned.”

Building the Dryden is also part of Bhagwan’s strategy to increase its maintenance services, as it chases work across Australia to make up for a drop in services to offshore projects in Western Australia under construction.

“Hopefully maintenance will become the larger part of our business,” Mr Kannikoski said.