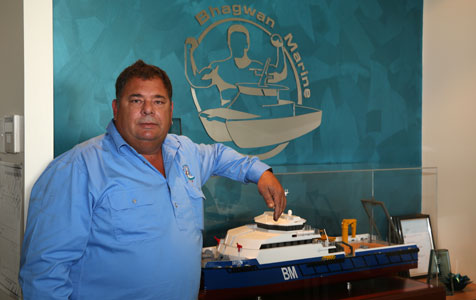 Fast-growing Geraldton business Bhagwan Marine has expanded its service offering and geographical presence through the acquisition of a Northern Territory marine services business.

Bhagwan this morning announced it’s buying Darwin-based Workboats Northern Australia. The business has about the same number of vessels as fellow Darwin-based workboat operator Broadsword Marine Contractors, which sold to Skilled Group for $75.5 million this week.

The acquisition of Workboats Northern Australia will boost Bhagwan’s fleet of vessels by 50 per cent - taking the total number of boats from around 70 to in excess of 100.

In addition, about 180 staff will be added to Bhagwan’s current workforce of 450. Bhagwan was last week named Business News' Rising Star of 2013.

Managing director Loui Kannikoski said the acquisition aligned with Bhagwan Marine’s strategy of diversifying its business to cater more to port and wharf construction, which Workboats Northern Australia was active in.

It would also allow Bhagwan to take advantage of Workboats’ existing relationship with operators around Hay Point and Gladstone to pursue expansion into Queensland.

Mr Kannikoski declined to reveal the value of the acquisition, but said Bhagwan’s turnover would increase by about 25 per cent in the coming financial year as a result.

Bhagwan’s turnover for the 2012 financial year was $120 million.

The acquisition is being funded by both debt and equity.

Mr Kannikoski said the company had been exploring the Northern Territory for acquisition opportunities and approached Workboats Northern Australia about six months ago with an offer.

“As a plus for Workboats the acquisition gives them access to our business, which is active in different areas,” Mr Kannikoski said.

“We do compete in a few areas but they’re mainly in areas that we’re not, so we saw it as a good fit.”

Mr Kannikoski said Bhagwan had considered buying Broadsword, but the fact two acquisitions have been finalised in the same week was merely a coincidence and evidence that the Northern Territory was an attractive market.

Integrating Workboats into the Bhagwan business was expected to take up to a year.

“We’re going to do it slowly, we don’t expect to go in and change the world in the first five minutes,” Mr Kannikoski said.

“We have got a manager in place in Darwin that we’ve had for quite a while and he will work very closely with the Workboats team, and they’ll become an integral part of our company.”