It is hard to find a winner in the coal-mining industry these days but some investors were quick to spot a Perth-based winner yesterday in the form of Wesfarmers, which saw the value of its coal assets boosted by a deal in the Hunter Valley of NSW. 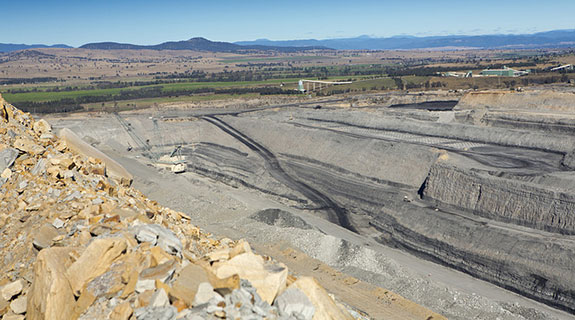 Rio Tinto announced the sale its 40 per cent stake in the Bengalla open cut coal mine in NSW yesterday.

It is hard to find a winner in the coal-mining industry these days but some investors were quick to spot a Perth-based winner yesterday in the form of Wesfarmers, which saw the value of its coal assets boosted by a deal in the Hunter Valley of NSW.

The 2.4 per cent rise in Wesfarmers share price on Wednesday might have been influenced by other factors but the only news-making event which affected Wesfarmers was a coal deal between Rio Tinto and New Hope Corporation.

At first glance there doesn’t appear to be a Wesfarmers connection in the $865 million New Hope has offered to pay Rio Tinto for its 40 per cent stake in the Bengalla coal mine.

But, what that deal means is that other shareholders in Bengalla have been provided with a fresh, and substantially increased value on their Bengalla stake and that includes Wesfarmers which also has a 40 per cent interest in the mine, with the 20 per cent balance held by Asian investors.

Until New Hope raided its substantial cash reserves of more than $1 billion most coal assets in Australia had been written off by investors as having limited attraction given the effects of low coal prices and the campaign to demonise coal as a mineral without a future.

What Wesfarmers now knows is that its Bengalla stake is worth at least $865 million, which is substantially more than values previously placed on the asset by investment banks.

The Bengalla purchase by New Hope also means that another Wesfarmers coal investment, the 100 per cent-owned Curragh mine in Queensland, has enjoyed a substantial increase in value, and because Curragh mines high-value metallurgical (steel-making) coal it should be worth more than Bengalla, with its lower-value thermal (electricity producing) coal.

But, even more interesting than the higher valuations which can now be applied to Wesfarmers coal investments, is the exquisite decision which the directors of the company have to make which boils down to this; do nothing about the New Hope offer to Rio Tinto, or match the price, which is an option under the terms of the joint venture governing Bengalla.

Matching the $865 million to buy another 40 per cent of Bengalla, is a highly unlikely step by Wesfarmers which has been losing interest in coal thanks to its poor returns on invested capital.

Last financial year the company’s two mining assets produced 15.5 million tonnes of coal, roughly the same amount as the 2014 financial year, but lower prices meant revenue fell by 11 per cent to $1.38 billion, and coal earnings before interest and tax crashed by 61.5 per cent to $50 million – for a return on capital invested of 3.4 per cent, down from 8.9 per cent in 2014.

Given Wesfarmers’ strong focus on clearing the hurdles it sets for capital efficiency, the coal assets are an outlier, almost certainly doomed for sale, or closure, unless their performance can be improved substantially.

On a capital return basis alone, Wesfarmers will not bother to match New Hope’s $865 million for another 40 per cent of Bengalla, with a factor contributing to that decision being the unappealing criticism of environmentalists who dislike anything to do with coal.

But, even by doing nothing Wesfarmers can now look at its coal operations in a more positive light because it knows there are buyers for its mines if/when it decides to sell.

New Hope, which is one of the few remaining ASX-listed specialist Australian-owned coal miners, is obviously keen to expand its footprint in the industry, perhaps because it reckons the coal price is bottoming, and also because coal is exported in US dollars.

That view of coal emerging from its time in the sin bin is supported by the views of New Hopes chief executive, Shane Stephan, who sees an opportunity to expand Bengalla’s annual output from 8.6 million tonnes a year to 12 million tonnes, a step up which already has government approval.

Wesfarmers could, in theory, participate in the expansion of Bengalla though that would involve committing more capital to a business which sits at the bottom of its performance measures.

A more likely development is that the entry of New Hope, and its interest in growing its coal business, could create an exit point for Wesfarmers from Bengalla, with the sale of Curragh probably not far behind, if a buyer can be found.

In theory, a total exit from coal could generate up to $2 billion for Wesfarmers, cash which might find its way to shareholders given the company’s history of generous capital management programs.