A slowing of capital works spending and a brake on public sector recruitment are among the premier’s measures for reining-in debt. 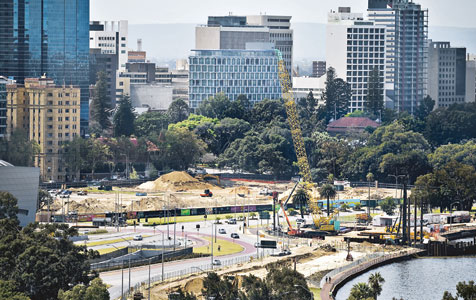 EXPENSES: The government’s signature capital works projects are proceeding apace, while others may be placed on hold. Photo: Attila Csaszar

Premier Colin Barnett has outlined a range of measures aimed at making government more efficient, and easing the regulatory burden on business. Heading the program will be a formal ‘repeal week’ in parliament.

About 30 pieces of legislation the premier described as “redundant” will be abolished during the special week of sittings scheduled for later this month.

“So long as the legislation sits on the statute books, someone has to administer it and it has an impact on all range of things,” Mr Barnett said in his leader’s address to the WA Liberal Party annual conference.

“There will also be a wave of legislative change and repealing a whole lot of unnecessary regulations which particularly impact on small business. We will continue our program of reducing boards and committees.”

He said the approvals backlog in the mining industry had been cut by 50 per cent since 2008, and that more emphasis would be given to reducing the regulatory burden on agriculture.

Mr Barnett conceded that the first few months following the government’s re-election in March had been a “pretty rocky period”.

“If something was going to go wrong, it did,” he said. But he claimed the government was back on track.

The premier referred to the loss of Western Australia’s AAA credit rating as a “political blow”, and while he did not venture an opinion on when it would be regained, he gave an assurance that spending would be tightened.

After winning the 2008 election, Mr Barnett was determined not to lead a timid government. Programs for new hospitals, schools and roads were pursued, keeping the state strong after the problems linked with the GFC.

“So we borrowed more money and have a debt in excess of $18 billion, but ...  that debt is not out of control and is manageable,” he said.

“Clearly we are going to slow down our capital works program; not a drastic or radical change, but we will slow it down. Some projects we might drop, other projects we might slide out in time a little more. So we will take our foot off the pedal.”

The government would also pull back on recurrent spending, meaning a brake on public sector recruitment. This would have to apply mainly to the administrative sector, given the sensitivity linked with frontline services in health, education and law and order.

Mr Barnett also said the government would press on with local government amalgamation because “it is the right thing to do”.

Earlier, Prime Minister Tony Abbott flagged that the WA party might soon be looking for a new director. He heaped praise on the incumbent, Ben Morton, from NSW, for the success of the party’s campaign in WA earlier this year.

The director’s position in NSW has just become vacant and Mr Abbott wished Mr Morton well, noting that wherever he ended up, his work in WA would be remembered.

Mr Morton has helped rebuild WA membership to more than 8,000. One veteran Liberal at the conference said the WA division “would not let him go”.

Beware governments that claim their decisions will lead to lower prices, especially when they don’t control the pricing mechanism.

The federal government’s assertion that the removal of the Gillard Labor government’s carbon tax will result in cuts of 9 per cent cut in electricity prices, and 7 per cent in the gas bill, is a case in point.

The reason for the caution is that the track record is not good.

Remember when WA’s Labor state government broke up Western Power? It was going to usher in a new era of competition, resulting in lower prices.

It didn’t happen. In fact the first term of the governing Liberal-National alliance resulted in electricity price increases of more than 60 per cent, which would have had most governments tossed out.

Then there was the decision to attach household emergency insurance to local government bills, to ensure all property owners paid the levy, rather than just the conscientious residents. Average levies would come down because more people would be paying. Sadly that didn’t seem to happen either.

That Prime Minister Tony Abbott and his ministers are claiming the repeal of the carbon tax will result in household savings is more to embarrass Labor, which says it will vote to retain the tax unless it is replaced by an emissions trading scheme, than any firm conviction they will be proved correct.

State bodies set power prices, and even if the tax is repealed, these state entities will still have their own annual increases.

So unless the unexpected happens and the states contain their own increases, any actual impact on households from dumping the carbon tax is likely to be modest. Hopefully Mr Abbott’s claims are borne out, but past experience says that won’t happen.