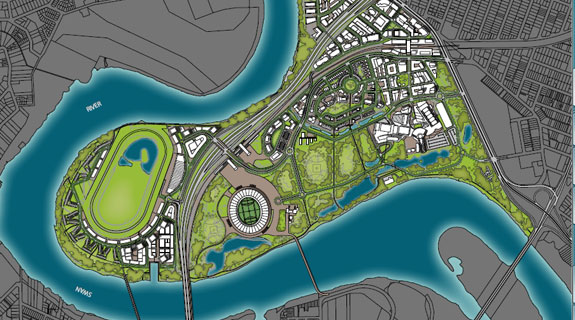 An aerial plan of development on the Burswood Peninsula. Image: WAPC.

More apartment developments are coming to the Burswood Peninsula, with the Town of Victoria Park formally adopting guidelines to pave the way for the first stage of Belmont Park, while Finbar Group has been given the green light for a new project at Springs Rivervale.

The Town of Victoria Park today officially adopted the detailed area plan for precinct D at Belmont Park, which is an area in close proximity to the new Stadium Station, which recently kicked off construction, at the south-eastern corner of the racecourse.

Developer Golden Group will now be able to lodge applications to develop the area, with the land proposed to include between 977 and 1,500 apartments, 20,000 square metres of office space, 3,800sqm of retail space, a hotel and public open space.

Golden Group’s plan at precinct D has an end value of more than $1 billion.

Earlier this year, Business News reported that Golden Group had been working closely with the Town of Victoria Park and its architects, Hassell, to create a statement building for the first phase of development, while also closely integrating hospitality and retail elements.

Town of Victoria Park chief executive Anthony Vuleta said the next stage would be subdivision planning, which would create individual development sites, which would then allow development applications to be lodged.

Mr Vuleta said the first application, for a $200 million development, is expected to be lodged very soon.

“The Belmont Park development will provide attractive options outside of the CBD for people who want to live in high or medium-density residential housing in an exciting entertainment precinct,” he said.

“This development is in walking distance to the new Perth Stadium, Crown Casino, CBD and Swan River.

“It is a huge and incredibly exciting development for the town and the wider Perth metro area.”

Belmont Park is one of three major precincts to be developed on the Burswood Peninsula, the other two being Burswood Station and The Springs.

At Burswood Station, marketing is well advanced for the first apartment project in the pipeline, Norup + Wilson’s 21-storey, $100 million The Crest, at 112-118 Goodwood Parade.

Also in the precinct, a plan submitted by Hillam Architects on behalf of landowner Asset Link Australasia to build a 10-storey, 134-apartment building at 70-72 Goodwood Parade was recently approved by the metropolitan central development assessment panel.

The site was formerly a wrecking yard, which has now been cleared to allow for the apartment development.

Meanwhile, a short distance away on the other side of the train line, Finbar Group has been cleared to launch its latest project at The Springs in Rivervale.

Finbar announced to the ASX today that the metropolitan central development assessment panel had given the nod to its 183-apartment project at The Springs, which will be located on the corners of Brighton Road, Rowe Avenue and Lauterbach Way. The project is a joint venture between Finbar and the landowner of the site, with marketing expected to be launched before the end of the year.

Managing director Darren Pateman said Finbar was aiming to create an entry statement for The Springs, with a significant investment in public art proposed for the development, as well as seven ground floor commercial tenancies to provide amenity for residents.

“The Springs has been a successful development precinct for our company with the completion of Spring View Towers last year and the forthcoming completion of Arbor North expected later this year,” Mr Pateman said.

“This project will provide continuity for the Springs development pipeline and allows us to create an exciting entry statement for all residents within the Springs precinct.

The Springs has been a veritable hotbed of apartment development activity since it was first launched in 2011.

BGC Development is also advancing plans to construct a 224-room Aloft Hotel at The Springs, a project which won development approval earlier this month.

Work is expected to begin on the hotel in coming weeks.