SPECIAL REPORT: For the second year running, the value of shares held by company directors in WA has fallen sharply, though some operators defied the trend. 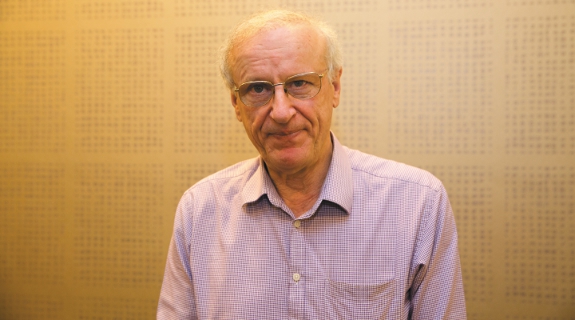 For the second year running, the value of shares held by company directors in WA has fallen sharply, though some operators defied the trend.

Also in our special report: the mystery concerning FMG shareholdings.

Fifty-six company directors and executives in Western Australia hold shares in listed companies worth more than $10 million each, according to the updated BNiQ Wealth Creators list.

How they got there tells a tale about changing business fortunes in the state.

For starters, the number of people who made the $10 million cut-off is down from 62 a year ago.

Their combined wealth – represented by known listed share holdings – has also fallen, by about 25 per cent, to $5.7 billion.

That is mainly driven by changes at the top end of the list, and hides some big increases in wealth among small and mid-sized companies.

Fortescue Metals Group chairman Andrew Forrest has seen the value of his one-third stake in the iron ore miner fall by 30 per cent, to $2.5 billion, over the past 12 months.

The state’s – and Australia’s – wealthiest person has also suffered a big cut in her estimated wealth, as a result of falling iron ore and coal prices.

BRW recently slashed Hancock Prospecting chair Gina Rinehart’s estimated worth by 30 per cent, although she still sits on $14 billion.

Her fortune could fall even further if two of her four children, John Hancock and Bianca Rinehart, are successful in their long-running legal claims for a share of the family wealth.

Sitting below her is Stan Perron, whose estimated fortune was little changed at $2.65 billion, reflecting his exposure to two stable industry sectors – automotive sales and property.

The general weakness in equities and commodity markets means some of the big winners in recent years include people who sold at the top.

A prime example is Tony Poli, who reaped $405 million when a consortium led by China’s Baosteel bought his iron ore company, Aquila Resources.

Mr Poli has started buying properties around WA through private company Aigle Royal Developments, but it’s safe to assume most of his Aquila money remains intact. 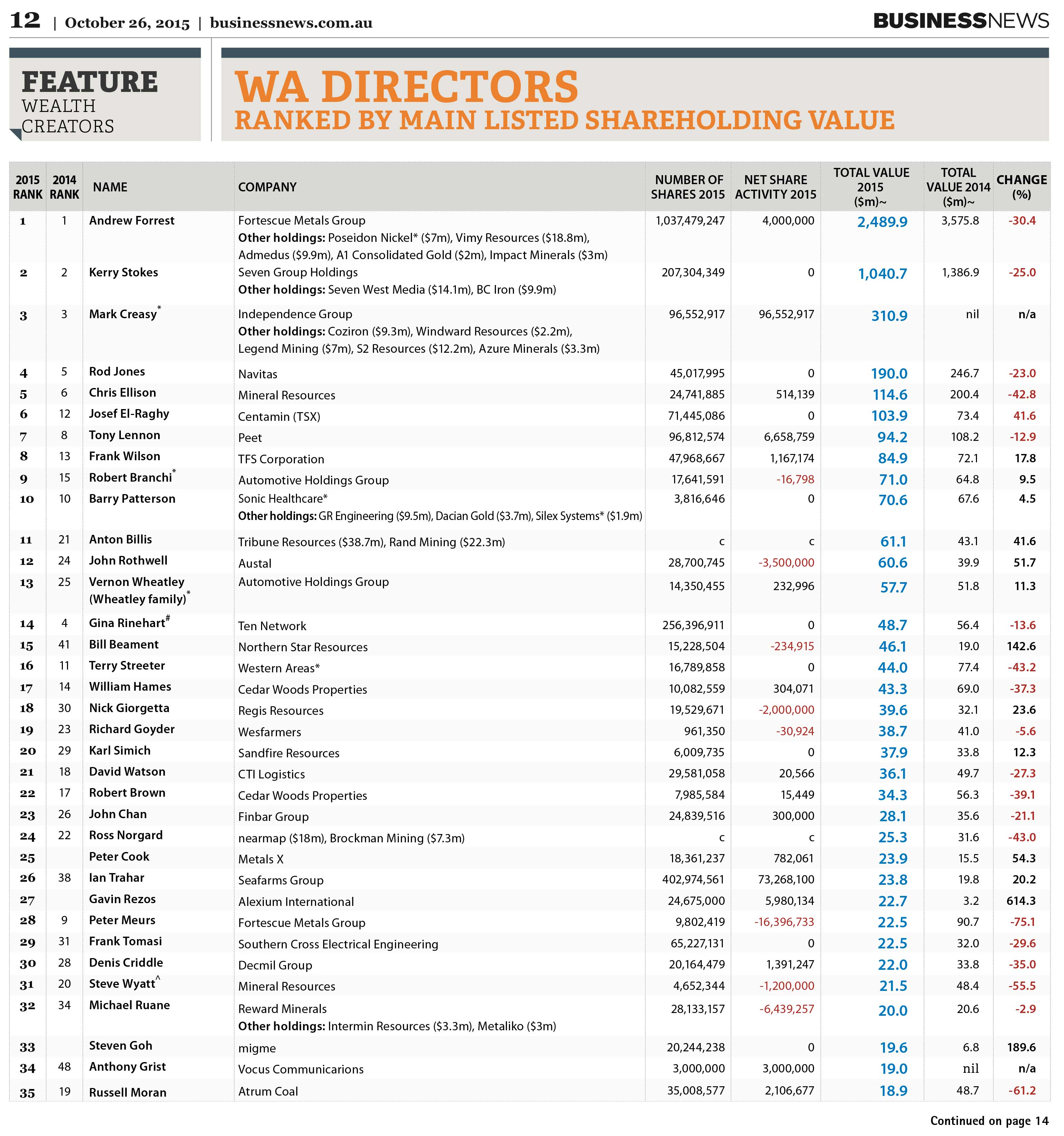 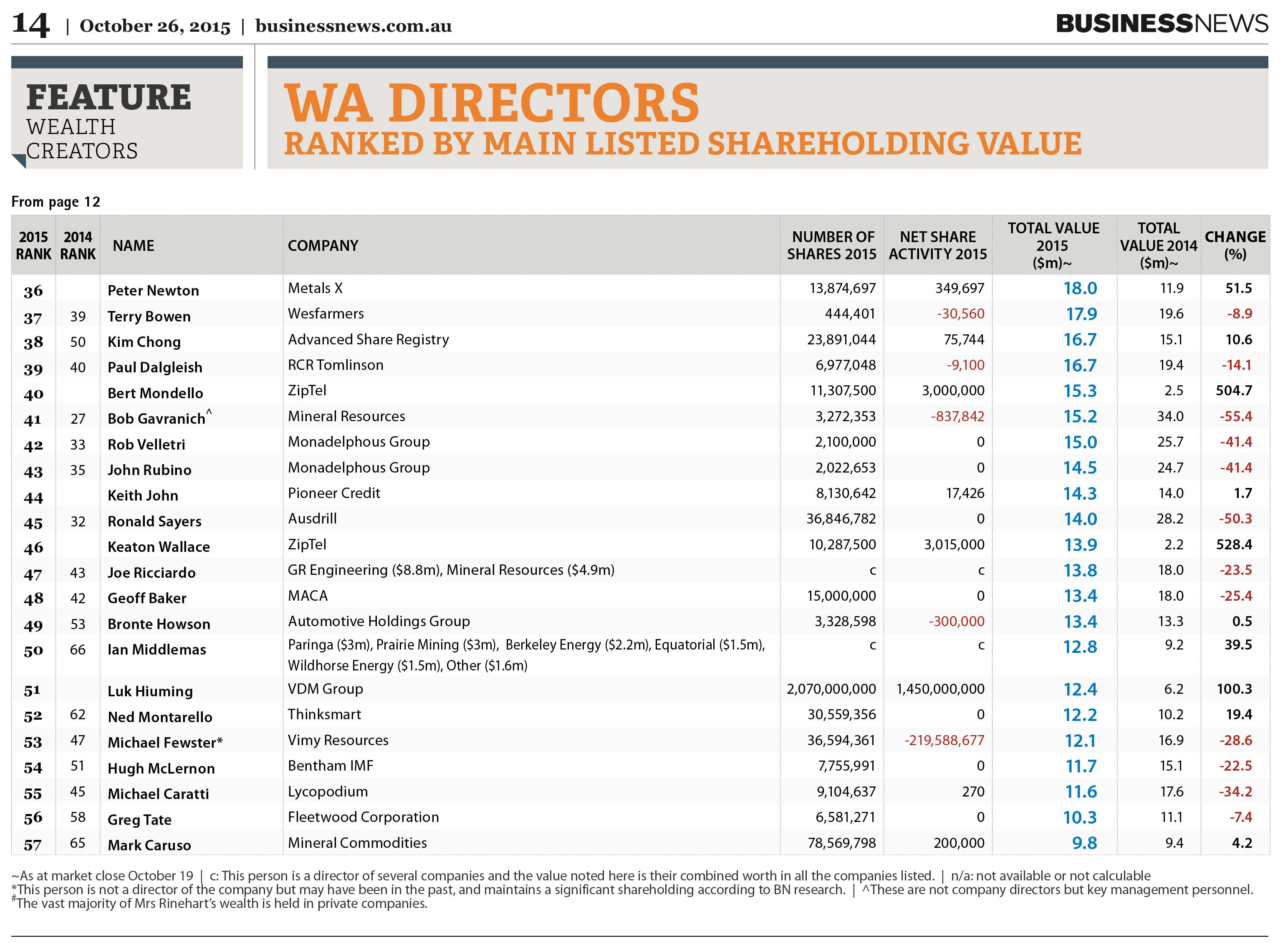 Tech investors have made some big gains during the past year, including Alexium International’s Gavin Rezos, Ziptel’s Bert Mondello, and migme’s Steven Goh.

But among bigger companies and bigger fortunes, the two standouts are gold miner Bill Beament and famed prospector Mark Creasy.

Mr Creasy is in many respects an exception to the norm, including the fact he is generally not a director of companies he backs.

His approach is like that of a venture capitalist – investing in a portfolio of tech ventures in the hope that one of them proves to be a big hit.

In Mr Creasy’s case, he has had two particularly big hits.

The first came in 1994, when he famously sold the Bronzewing and Jundee gold deposits to Joe Gutnick’s Great Central Mines for $130 million.

The second came via Sirius Resources and its Nova nickel discovery, which is now being developed into a mine.

It was Mr Creasy who originally pegged the tenements at Nova and subsequently vended them into Sirius when it was a startup in 2010.

In line with his normal approach, he retained a 30 per cent direct stake in Nova and took a similar shareholding in Sirius.

First, the value of his Sirius shares soared after the Nova deposit was discovered.

Second, Sirius bought his direct stake in Nova for 70.6 million shares, $28 million in cash and a 0.5 per cent royalty on future production.

Third, he agreed this year to accept Independence Group’s scrip takeover of Sirius.

Mr Creasy now holds an 18.6 per cent shareholding in Independence worth $310 million, $75 million in cash, and a 34.6 per cent stake in spin-out explorer S2 Resources.

Putting those together with the $28 million cash he got last year, he has affectively turned a parcel of remote tenements in the Goldfields into assets worth a combined $420 million.

In addition, Mr Creasy continues to be a substantial investor in junior explorers, including Coziron Resources and Windward Resources, and more recently Legend Mining and Azure Minerals.

His unlisted interests include a majority shareholding in White Rivers Exploration, which last year established an exploration and development joint venture for its Beisa project in South Africa with Harmony Gold Mining.

Mr Creasy also holds a number of properties in West Perth, and no doubt many other assets out of the public eye.

Northern Star Resources managing director Bill Beament attributes his success, in part, to his background as a mining engineer and contractor.

“I’ve always had the belief that if you run a business it has to make money, and that’s the beauty about being a mining engineer.

“We’re different to geos; a lot of them are good at spending money but don’t worry about the business, whereas mining engineers don’t have a job if you don’t make money, so it’s in your DNA.”

In a little over five years, Mr Beament has taken Northern Star from a small operator with a single mine to one of the state’s largest gold miners, valued at $1.8 billion.

Most of Northern Star’s growth has come from buying mature mines from big international players.

“We always had a view that the majors would exit Australia, and we got the timing pretty right,” Mr Beament said.

“That gave us a first-mover advantage.”

Northern Star has had a big focus on lifting the efficiency of those mines, while also lifting its gold resource through exploration.

“The general managers at our mines are the absolute kings of the organisation; all we are in Perth is a resource for the sites, to get what they need and make sure there are no roadblocks,” Mr Beament said.

“That’s a discipline you can take to multiple mine sites.”

When Mr Beament talks, he outlines a series of business principles that seem obvious – the secret is ensuring they are properly executed (and the market’s judgement is that he is doing just that).

“Make sure you recruit and train and bring up the right people in your organisation and empower them to do the job,” he said.

“We’ve always run a lean business, that comes from our contracting background, and we always focus on productivity of our people and equipment.”

“Stick to your core disciplines, the mining, geology and processing; if you look after them, everything else falls into place.”

Mr Beament emphasises that Northern Star is first and foremost a business, and mining is the way it delivers value.

“If you are not profitable and growing the business and giving something back to shareholders, if you aren’t doing all three, you are not a complete business,” he said.

Maintaining dividend payments to shareholders is a key priority.

“At the start of every budget cycle, the dividend is the first thing that goes in after costs,” Mr Beament told Business News.

“If we need to defer some exploration or capital that really isn’t necessary that year, that gets juggled and deferred.

“It’s a great discipline for boards and management to have in place.”