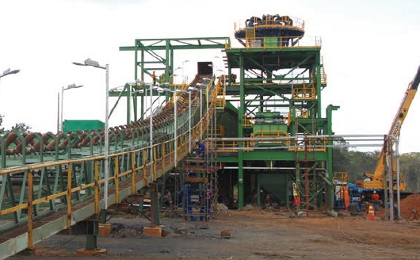 The SAG mill at Tucano in Brazil, which is nearing completion.

Beadell Resources has secured an additional $10 million in financing from Macquarie Bank as the company nears completion of construction of the processing plant at its Tucano gold mine in Brazil.

Beadell announced today it had sold Macquarie call options over 48,485 ounces of gold, at a strike price of $US1,700 per ounce.

The additional funding takes Beadell’s cash balance to around $37 million, with approximately $14 million earmarked for construction of a carbon leaching plant at Tucano.

Beadell said construction was on track for first ore to be fed to the mill in October.

“Additionally we are very excited about the prospects of the exceptionally high grade gold results recently released at the Duckhead gold resource.

“This deposit has the real potential to transform the company’s mine plan in a very short time frame.”