Battery boom has a way to run

Few projects are more meaningful for WA’s economic direction than the Greenbushes lithium mine expansion and the new lithium refinery in Kwinana. 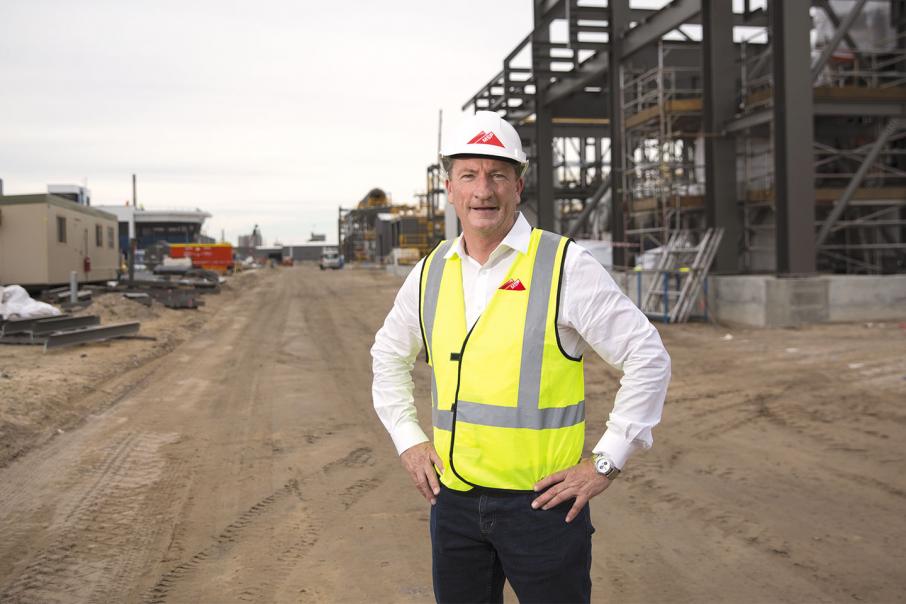 The first step in Western Australia’s bid to move further along the lithium supply chain should be in production by the end of this year, while at least three other proponents are considering similar facilities.

Work on train one at Tianqi Lithium’s Kwinana processing plant is about 65 per cent complete, according to contractor MSP Engineering chief executive Peter McSweeney, with commissioning of non-processing infrastructure under way.

The West Perth-based company is also building a further processing train in a stage-two development, with the whole project worth more than $700 million.

Combined, the two trains will have a capacity of 48,000 tonnes per annum of lithium hydroxide, used as an input in battery making.

Mr McSweeney told Business News the second phase of the project, which received the green light in October, was about 10 per cent complete.

That part of the project is expected to go into commissioning in the September quarter of next year.

The two trains will be supplied with spodumene concentrate (lithium ore beneficiated to 6 per cent purity) trucked up from the Greenbushes mine in the South West owned by Talison Lithium, which is 51 per cent controlled by Tianqi.

To provide the increased output required, the Greenbushes mine is undergoing a $320 million expansion, which was approved in March 2017.

Production capacity is being roughly doubled to 1.3mtpa of concentrate.

MSP Engineering has been contracted to work on that project, building on a relationship developed over many years.

“We’ve been working exclusively with Talison for the past 20 years in terms of doing their major lithium works at Greenbushes … we’ve done all the major expansions at Greenbushes,” Mr McSweeney said.

The association predates even that.

“I went down there as a young engineer working on the mine doing maintenance work,” he said, while his father had been mine manager at the project in the 1960s.

Mr McSweeney said commissioning at Greenbushes was scheduled to get under way in the first half of 2019.

After that, a further capacity increase is being considered by Talison, with a feasibility study due by year’s end.

Business News understands an additional expansion would be worth around $500 million, and would nearly redouble production at the mine.

At Kwinana, there is space for at least one more processing train, and there has been industry speculation that Tianqi might move to include a third leg of the project.

Mr McSweeney said MSP had been working with Tianqi for nearly four years, analysing stage one of the plant.

It had originally been considered for development in China.

There were good reasons to choose Kwinana, however.

Cheap gas was available in WA, and the project had been timed to be at a low point in the labour costs cycle, Mr McSweeney said.

In addition, shipping costs for highly concentrated lithium hydroxide were much lower than for spodumene concentrate.

Kwinana was also a good location to make use of local industry, Mr McSweeney said.

“We’ve written about $600 million in contracts for local suppliers,” he said.

“All the fabrication and construction activity is happening by suppliers in a 20-kilometre radius, which makes delivering the project less challenging.”

Mr McSweeney said suppliers from Kemerton and the South West were also used at Greenbushes.

He cautioned that businesses seeking to build lithium processing plants would need to find experience in the sector, as the projects were highly complex.

Three other businesses are hopeful of getting lithium processing projects up.

US-based Albemarle Corporation, which owns 49 per cent of Talison Lithium, is planning to spend $US425 million on a processing plant in Kemerton, although a final investment decision has not been made.

Speaking to analysts in February, chief executive Luke Kissam said he was confident of demand for the company’s next wave of lithium processing projects, which included Kemerton.

“The first phase of the (Kemerton) greenfields site will initially have 40,000tpa of conversion capacity, but we will build an infrastructure that is scalable for significant expansion,” he said.

Chilean business SQM is working with Melbourne-based Kidman Resources to build a lithium refinery using production from the Mount Holland mine, located near Southern Cross.

A location for the refinery is to be announced in the June quarter, with Kwinana, Bunbury and Kalgoorlie all possibilities.

Mineral Resources is building three lithium concentration plants at the Wodgina project, with the last to be finished in 2020.

MinRes is working on a feasibility study for a lithium carbonate processing plant in the Pilbara, with construction touted as early as next year.

“We’ve been able to progress construction in a very efficient and fast manner; it’s gone as well as could be expected,” Mr Brinsden told Business News.

There’s a good chance the project will be followed by a phase two development, which the company has previously estimated would cost about $207 million.

“We’re actively working on (feasibility for) the stage two project, which takes our processing capacity from 2mtpa to 5mtpa,” Mr Brinsden said.

“In its own right, that’s a significant expansion, but our expectation is that’s exactly what’s going to happen.

“We’ll continue to grow the mine because we have a massive resource, massive reserves, and the customers are demanding more product, so we’re happy to be a part of that.”

Pilbara has offtakes secured for all of the stage two sales, with an expanded operation to produce about 564,000tpa of concentrate annually.

Mr Brinsden said he felt the industry was overestimating the potential for new supply from producers who extracted lithium from brines (mostly in South America) and underestimating the level of hard rock lithium (Australia’s product) to come onto the market.

“But the really important thing is everybody is grossly underestimating the speed of the demand response, especially from China,” he said.

During the early part of the iron ore boom, the market had similarly underestimated how much and how quickly Chinese blast furnace capacity would be built out, Mr Brinsden said, and the lithium market was likely to follow a similar path.

Altura Mining managing director James Brown was another to be optimistic about the potential for the sector.

“Up in China, and talking to our partners, there’s new supply coming along but history tells us that hasn’t appeared on the market the way you’d think,” Mr Brown said.

“And all of us have a home for our material to go to.

“Looking at prices, everyone thought they’d pull back a year or two ago ... we were quite buoyed to see (MinRes) releasing strong prices for 6 per cent (spodumene concentrate).

“I can’t see any (major fall) in the next, at least year and a half.

“A lot of it depends on conversion capacity, and what the market doesn’t realise is the speed and the agility that China can adapt to put that capacity in.”

He said work at Altura’s Pilgangoora project was progressing well, with wet commissioning due in May.

The company recently finished a feasibility study to double capacity to 440,000tpa at a cost of $114 million.

Nameplate capacity would be reached by 2020, according to an ASX release by the company.

BHP Billiton Nickel West is investing about $54 million into a 100,000tpa nickel sulphate plant at its Kwinana refinery, due for completion next year. An expansion to double that capacity is under consideration

Australian Vanadium is working towards the Gabanintha vanadium project, with that metal used in a particular type of battery.

The business’s Mulga Rock project will be able to produce cobalt, which has tight supply globally, and other base metals, according to chief executive Mike Young.

Cobalt production of about 2,500tpa would contribute credits to reduce the project’s uranium production costs about $US4 a pound.

That would reduce all in sustaining cost to about $25 a pound, competitive with around half the world’s uranium production, he said.

Mr Young said Vimy would be working to secure offtake partners, while front end engineering was due later this year or early next year.