TWO Western Australian communications technology developers and exporters have joined forces to capitalise on opportunities in the commercial and military sectors around the globe. 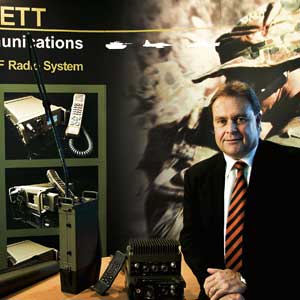 TWO Western Australian communications technology developers and exporters have joined forces to capitalise on opportunities in the commercial and military sectors around the globe.

Barrett Communications managing director Philip Bradshaw said the acquisition would boost the company's ability to target military markets, which currently made up 17 per cent of the business.

"We heard they (Q-MAC) were on the market and had been looking at them for some time," Mr Barrett told WA Business News.

"Because of our involvement in the military communications area we decided that, as they had a VHF product line it, would be complementary to ours in the international sense.

"We're hoping to take our work in military markets up to between 35 and 40 per cent of our business."

However, both companies will soon be located under the one roof - an 11,000 square metre facility under construction in Bibra Lake that Mr Bradshaw said he planned well before the Q-MAC acquisition was ever a consideration.

Mr Macduff and fellow director Joe Mihic resigned their positions with Q-MAC as part of the acquisition, although the majority of Q-MAC's 30 staff are expected to stay on.

Other benefits of the acquisition include the adoption and integration of Q-MAC's international distribution network for military buyers, as well as picking up research and development projects that are potentially valuable in terms of servicing top-tier military outfits.

"The software defined radio project is an R&D project which will basically be our next offering to the market in the military area.

"It's both an HF and VHF radio combined tactical - tactical is the word for all of this - and we see this as a great development for our new product line."

Mr Bradshaw said that, after servicing the United Nations under multi-million dollar contracts for the past 10 years, and the commercial markets for 25 years, moving further into the military markets was a natural way forward.

"We're moving into a second-tier military market, not the top end tactical but one used by third world countries I guess that Q-MAC were supplying to," he said.

"But with the addition of the SDR project now we're looking at moving into even the tier one tactical markets as well."

Barrett turned over about $34 million in the 2007-08 financial year but profits and turnover are expected to be down for fiscal 2009.

But Mr Bradshaw is confident about the future, considering orders have recently picked up again.

"I can honestly say I think we've put a radio into just about every country in the world now, there's not many places we are not," he said.