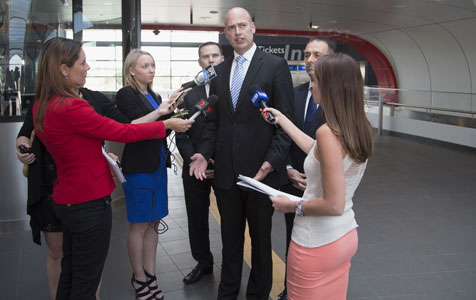 DEFENCE: Dean Nalder has come under fire for what the premier described as a “poor choice”. Photo: Attila Csaszar

It may be just more than 27 years since Brian Burke retired as Labor premier, but you can still hear his name being thrown around during debate in the Legislative Assembly.

Mr Burke’s surprise decision to retire took effect on February 25 1988, his 41st birthday. According to the Morgan Gallup Poll at the time, he had an approval rating as premier of 59 per cent. The revelations regarding deals linked with WA Inc were yet to come, as were two jail terms, the conviction for one of which was overturned on appeal.

Premier Colin Barnett used the former premier’s name to deflect Labor probing on the actions of Transport Minister Dean Nalder, who last year invited a business partner to a meeting he was having with the Chinese consul general.
“Why did the premier not sack the minister from cabinet for this clear conflict of interest?” opposition leader Mark McGowan asked.

Labor was clearly raking over old and sensitive ground, and Mr Nalder had already suffered some pain, losing the finance portfolio – and a senior staff member – as a result.

Mr Barnett answered, in part: “ … it was not a good choice or decision. He was a new minister, I understand that. A mistake was made. It was a poor choice. There was no self-interest, no personal gain – none at all.”

It was one of several questions, and continuous interjections, from Labor MPs on Mr Nalder’s actions on the second day of sittings after the long Christmas-New Year break. They tested the premier’s patience, and eventually he snapped.

Referring to suggestions of wrongdoing, he said: “If you know it, provide evidence. I have said repeatedly to everyone, including members of the media, that if they have evidence of any wrongdoing, please bring it to me. Do members know what? No-one has been able to do that.”

Mr Barnett then threw the question back at Labor: “As if we are going to be held against some moral compass by the Labor Party. It conga-lined through the Corruption and Crime Commission relating to dodgy deals with Brian Burke, Julian Grill and everyone else. As if the Labor Party has any morality on these issues …”

There’s no substitute for experience in politics. The premier drew on his, but Mr Nalder – who is just short of two years as an MP – struggled when Labor applied the blowtorch to his belly.

Opposition frontbencher Rita Saffioti asked him about the resignation from his staff of adviser Sarah Boska, who was caught up in the conflict of interest allegations that descended on his office.
In the circumstances the minister could have confirmed that she had left, had made an important contribution, and wished her well. Instead, he struggled for words, describing her as a tremendous human being, and that she had values and attitude ‘in spades’. He should have learned from the premier.

Mr Nalder also would have been wiser to draw on an old saying Paul Keating sometimes used: “The dogs may bark, but the caravan moves on”. Brian Burke certainly would have.

The recent death of former Labor Legislative Council member Bob Hetherington has helped highlight how priorities in selecting members of the house of review have changed.

Mr Hetherington, who was aged 92, was elected to parliament in 1977 and served for 12 years. He did not attain cabinet rank, but his views were always considered and commanded attention.

He had embarked on an academic career, lecturing in politics at the University of Western Australia after enlisting in the AIF during WWII and working in administrative jobs

His Labor colleagues in the upper house included Joe Berinson, who had served briefly in the Whitlam federal ministry and would later be WA’s attorney-general for 10 years, and two other lawyers. They were Howard Olney who was eventually lured to the WA Supreme Court by a coalition government – outraging his own party – and a future premier, Peter Dowding.

The point is that they were a mix of talented members with varying backgrounds, as is essential in such chambers.
It’s a far cry from today. Successful professionals and thoughtful union and community leaders are very thin on the ground. The chamber is full of loyal timeservers from various party and union positions. And the Liberals and Nationals aren’t much different.

The chamber would be far more effective in reviewing and improving legislation with some 2015 equivalents of Bob Hetherington. The sooner the parties get the message the better.