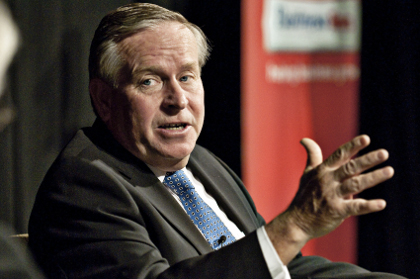 Mr McGowan said, if elected, he would explore renegotiating contracts on the Elizabeth Quay project, which has been under construction for 12 months.

Further roadworks on the project caused more congestion on Perth roads this week and Mr McGowan claimed the city's traffic was now in chaos.

But Mr Barnett defended the project, named in honour of Queen Elizabeth II, saying work was well advanced and he had no intention of changing contracts.

"Elizabeth Quay is well into construction, a $200 million contract has been awarded, and work continues," Mr Barnett said.

"The whole idea is opening up the river and the city together so having a wide expanse of water. If you left Riverside Drive what you would have is a pond in the city. Not much point."

Last week, an urban think-tank described the quay project as fundamentally flawed and said it would provide "no net economic benefit to the public".

Having already vowed to dump or alter several major projects, including the new Burswood stadium, Mr McGowan said he was setting out his priorities to the voters.

Meanwhile, Labor says election commitments by the Liberal-National coalition, plus previous unfunded government promises, threaten to push debt beyond $30 billion and strip the state of its AAA credit rating.

Premier Colin Barnett downplayed the report today, saying it made sense to fund major capital projects through borrowings and debt was under control.

But Mr Wyatt said the Premier should be worried, given state debt was projected to nudge $25 billion in 2015/16, eclipsing the government's previously hallowed $20 billion debt ceiling.

Add to that $4.9 billion in election commitments by the Liberal-National coalition, plus some $2 billion worth of other government pledges, and debt would soar to almost $32 billion, he said.

Mr Wyatt called on the Liberals to commit to having the coalition's election promises - including a light rail plan - submitted to Treasury ahead of the March 9 poll.

Treasurer Troy Buswell has previously said he would do this.

"We have two sets of hands in one pot of gold and what that will ultimately mean is double trouble for the state's finances," Mr Wyatt told reporters on Wednesday.

"Colin Barnett has said that he won't be finding any savings to pay for those election commitments - that means debt.

"He has no problem taking on more and more debt."

While Mr Barnett had rejected a Nationals' plan to impose a levy on the construction of resources projects to fund training, he was still building extravagant "monuments to himself", Mr Wyatt said, citing the Elizabeth Quay development under way on Perth's foreshore.

"These aren't priorities of Western Australians - these are extravagances by Colin Barnett to glorify himself," Mr Wyatt said.

WA was hurtling towards losing its AAA credit rating, meaning it would have to pay more for debt, he said.

"And how do you finance that? You cut services," Mr Wyatt said.

He also claimed WA Labor's ambitious $3.8 billion Metronet rail plan would have no impact on net debt over the state budget's forward estimates, with a large chunk of funds to come from changing or axing planned Liberal projects.

All eyes will be on Treasury's verdict after it receives Labor's submission for Metronet.