Barnett takes it up to Palmer

The fractious relationship between Colin Barnett and Clive Palmer has echoes of an earlier stoush between a 20th century premier and a mining magnate. 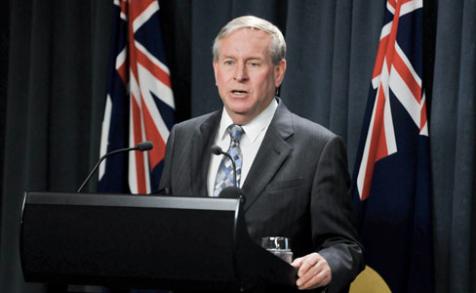 NOT HOLDING BACK: Colin Barnett has expressed some harsh opinions about how Clive Palmer does business.

Colin Barnett is not the first Western Australian premier to take on a high-profile player in the resources sector; and he won't be the last. But his recent criticism of big investor, and now federal MP, Clive Palmer, has been a long time coming.Mr Barnett had no qualms about taking on Mr Palmer, who radiates an amiable persona with plenty of bluff and bluster.

"I don't like the way in which he conducts himself," the premier said on ABC Radio, with extraordinary frankness. "And I spent hours and hours negotiating issues with Clive in good faith, then you find that he will then try and exploit any small discrepancy.

"And he's doing that in terms of the relationship with Chinese investors in our iron ore industry. It's not doing this state any good at all. So Clive's put himself into a difficult position."

Mr Barnett accused Mr Palmer of "viewing mining as a real estate project – getting fingerprints on bits of dirt ...", and scrounging every last dollar out of the Cape Preston project with the Chinese, adding "... to put it bluntly, the Chinese hate Clive Palmer."

Mr Palmer responded with typical bravado, and no small touch of sarcasm.

"I'm really worried what a great guy like Colin Barnett says," he replied. "It really upsets me. I can't sleep at night."

But it begs the question whether Mr Palmer's unorthodox approach to the development at Cape Preston – where he initially held mining rights – and the flaunting of his wealth is welcomed in an industry where profit margins are shrinking as ore prices ease. Cost blowouts at Cape Preston aren't helping.

The Barnett-Palmer relationship has parallels with that between Sir Charles Court and Lang Hancock over the opening up of the Pilbara in the 1960s. Mr Hancock is credited with discovering considerable ore deposits, and was keen to develop a mine with partner, Peter Wright.

"As a minister acting for a state, Charles Court had to make decisions which he felt would lead to results," Mr Mitchell said. "And to get results you had to have people able to deliver money, the expertise, the markets and to be credibly seen to be able to carry through what they promised to do."

Sir Charles accused Messrs Hancock and Wright of wanting to make the rules themselves. That was not on, and relations became severely strained. Mr Hancock's disappointment helps explain why his daughter, Gina Rinehart, is so determined to develop the multi-billion dollar Roy Hill mine in her own right.

Hopefully Mr Barnett's criticism will have a salutary impact on Mr Palmer's approach with his Chinese partners. But any change probably won't happen overnight.

The fact that there will be a contest for the position of president of the WA Labor Party is a welcome sign for two reasons.

The first is that there are enough prominent members of the party unhappy with its recent performance who are now prepared to put their hand up to lead. That the lay party has been languishing in recent years is undeniable.

The second is that the issue hasn't been decided by faction chiefs behind closed doors, as in the past, when the tendency has been for the faction heavies to indulge in horse-trading in a neat allocation of key roles.

'Guided democracy', you might call it, no involvement of ordinary members required.

Mr Tinley, a former SAS major with business links, entered parliament in 2009 amid high expectations. He has been distracted by family business issues but his latest move has been welcomed, especially by those on Labor's right, as a sign he is now prepared to play a bigger role.

Mr Evans was Labor's candidate in last September's federal election for the eastern suburban seat of Hasluck, which was retained for the Liberals by Ken Wyatt. His union has attracted controversy in recent weeks over strike threats in the resources sector.

Labor's challenge is that unions still have a very strong voice in the lay party, despite the drop in the proportion of unionists in the workforce. Party reform advocates such as Ms MacTiernan say this influence has to change to make the party more relevant.

The significance of Labor's presidency depends on how the incumbent uses the post. But the July ballot will also send a signal as to whether change is on the way. Strong oppositions keep governments on their toes, and all voters win. The contest will be keenly fought.