Barnett squeezed from all sides

Colin Barnett is in for his biggest test as premier in 2015, as mounting financial woes threaten to drain his political capital. 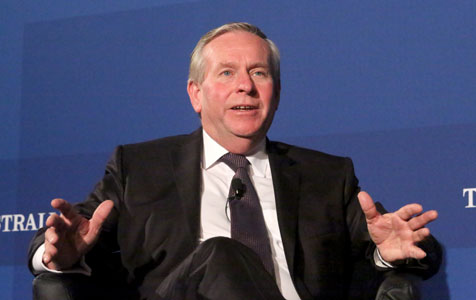 When Colin Barnett announced his intention to remain as premier and lead his government into the 2017 state election, he did more than attempt to deflect leadership as a potential issue.

The decision meant that, after his first six years in office (during which time the state's economy has been running smoothly), he was prepared to stay on and help it weather the financial challenges brought on by the collapse in the revenue from royalties and Western Australia's declining share of GST revenue.

Barring unforeseen events, Mr Barnett will jump up the premiership ladder, based on time in office. Currently, he is the eighth longest serving of the 29 premiers, at about six years and four months in office. If he serves through to March 2017, when the election is due, he will be in fifth place.

But in politics, as in most other pursuits, it is unwise to peer too far into the future. What is undeniable, however, is that the next two years are shaping as the toughest period for the member for Cottesloe since his surprise 2008 election win over the then Labor government led by Alan Carpenter.

At the top of his list of challenges is restoring the budget to surplus and regaining the AAA credit rating. Despite optimistic Treasury projections, the former is unlikely to be achieved within two years, which means the latter will also be delayed.

The government's mid-year Financial Projections Statement in December confirmed that this year's budget will deliver the first deficit in 15 years.

While acknowledging there's little the government can do about world iron ore and oil prices (which influence royalties) and the appalling GST deal – both of which have hit revenue hard – Mr Barnett did stick his neck out early in his term about never presiding over a budget deficit.

Since then, his government has spent up big, including on major public works – now called infrastructure – projects. While Labor say the premier has been far too ambitious, it's possible that benefits will be felt in the long term from costly projects such as the new football stadium and Elizabeth Quay.

In short term, however, they contribute to state debt, which must be serviced through increased interest payments. As a consequence, other spending commitments are being cut and extra revenue is being found, such as by deferring promised payroll tax relief.

While disclosing that the anticipated budget surplus for 2014-15 of $175 million had evaporated, replaced by an expected massive deficit of $1.3 billion, the Treasury indicated there was a ray of light at the end of the tunnel.

"An operating deficit is also now in prospect for 2015-16, with a return to a growing surplus outlook forecast from 2016-17," the statement said. "This outlook reflects the net impact of a substantial downturn in the state's own-source revenue (taxation and royalties), the impact of new revenue and savings measures in response to this change, and the lagged adjustment of Western Australia's share of GST grants."

Obviously a "growing surplus outlook" provides the Treasury – and Mr Barnett and his treasurer, Mike Nahan – with some wriggle room if they can't deliver a surplus in 2016-17, which, coincidentally, takes in the next election period.

But the budget is only one of a number of major political hurdles facing the premier and his team. One of the early obstacles to be confronted is local government reform, which has been hanging around now for five years.

Mr Barnett's resolve to cut the number of metropolitan councils from 30 to about 15 could come to a head in February in the Legislative Assembly over proposed changes to City of Perth boundaries. Talk of legal action and demands for referenda can't go on forever.

The next few months will determine whether the premier and Local Government Minister Tony Simpson, who inherited the policy, are determined to push through. Based on the low turnout in the last local government elections, it would appear most ratepayers aren't too fussed either way. But the issue has to be resolved; and the sooner the better.

Also worth remembering is Mr Barnett's declaration that public transport and easing congestion would be high on the agenda this term. So far there is little to show.

But remember, it never pays to get too far ahead of yourself.