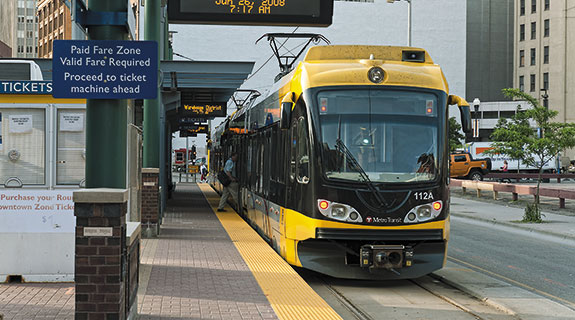 CASH CALL: WA has made a pitch for public transport funds, including for the MAX light rail project.

A new prime minister can offer fresh opportunities for the states. Nobody knows this better than Colin Barnett, who has just marked his seventh anniversary as premier, making him the nation’s longest serving leader.

The wily Mr Barnett knows that, if you are the focus of some concerning news yourself, the best strategy is to refocus; and that’s exactly what he has done.

So only days after the Western Australian Treasury confirmed that revenue had actually declined last financial year – for the first time in 18 years – the premier was pointing to Canberra, rattling the can.

Not that the government announced the figures in those terms. The budget deficit, for example, was a ‘sharp reduction’ compared with the original forecast of $1.3 billion, and state debt was ‘$2.1 billion lower than forecast’, according to the government. The theme is clearly to accentuate the positive, and then move on.

It came to $1.5 billion spread equally over three projects: the troubled MAX light rail plan from Mirrabooka to the city, and extending east and west; the Forrestfield rail link, which goes underneath Perth Airport; and further compensation for the poor GST deal.

As he has done before, Mr Barnett seemed to pluck the figures out of the air. Presumably a group of public servants is now working on a detailed submission with a logical case for assistance.

In these things there is always a strategic case as well, not necessarily in writing. And this would note that WA has been very good for the federal coalition government, as mentioned previously in Political Perspective (September 28). In addition, timing is everything in politics, and it always pays to get your wish list out early.

It’s no coincidence that two of the items on Mr Barnett’s ticket relate to public transport, which is where his government could be vulnerable at the March 2017 state election.

To say that MAX light rail project has been a fiasco is an understatement. It went from being fully costed and fully funded at the last election to deferral, with the assumption that a friendly coalition government would ‘kick in’ dashed when Tony Abbott said there would be federal money for roads only.

Labor leader Mark McGowan has already served notice that a revamped Metronet rail plan will be front and centre of his election campaign, So Mr Barnett’s pitch for federal money has an element of urgency.

There was some encouraging news in the latest budget report, however. Spending last year grew by just 2.2 per cent – the lowest since 1994-95. But governments do like to loosen the belt come election time.

Ben Morton, who stands down later this month after seven years as state director of the WA Liberal Party, is already a political veteran. Aged just 34, he has successfully overseen two federal and two state election campaigns for his party.

Mr Morton has also observed the increased use of social media and the steady decline of the once-influential daily newspapers in the communication process. This poses a challenge for parties trying to project their messages.

He told the recent state Liberal conference that party MPs are being lured by the media to provide commentary; and he doesn’t like it.

“My message is simple. Parliamentarians are not commentators,” Mr Morton said. “It’s harder and harder to get our message through. This means that we have to be more disciplined with our message.

“The only time you should hear from an elected representative is when they are explaining what they are doing to make life better for the people they represent.”

He also told members that the party had to break out of the ‘political bubble’ environment.

“We have to talk directly to the people that determine elections, and they don’t watch Sky News or ABC News 24,” Mr Morton said. “They don’t follow MPs on Twitter or Facebook.

“The changing media landscape and political bubble  ...  means that the old fundamentals of campaigning – knocking on doors, meeting and greeting people, that personal touch – are now more important than ever.

“I know some people will disagree with me, and I don’t mind. They can waste as much time tweeting to each other about it.”

Mr Morton is expected to take up a post in the private sector, amid speculation he will eventually return to politics. His replacement is former Victorian party official Andrew Cox.