Volatile royalty revenues and tightening budgetary conditions across the board pose a headache for the government. 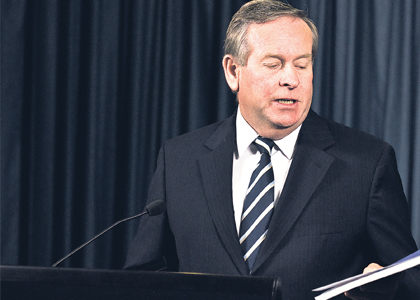 BARNETT’S HEADACHE: A recovery in stamp duty revenues won’t fill the shortfall created by the fall in royalty income, plus the cuts in reimbursements for the GST.

Volatile royalty revenues and tightening budgetary conditions across the board pose a headache for the government.

JUST when Premier Colin Barnett appears to have found clean air in his path to next March’s state election, along comes a turbulent patch that will require skilled navigating if his government is to stay on track.

The recent Newspoll, which showed the Liberal-National alliance comfortably ahead of the Labor opposition in voting intentions, was the reassuring news the premier and his team would have wanted.

And the reaction to the report of the committee headed by Alan Robson into rationalising local government boundaries in the metropolitan area was generally supportive, with the exception of the entrenched pocket of resistance in the western suburbs.

Significantly for the premier, who is the member for Cottesloe, that’s his own backyard.

But even Mr Barnett’s old Labor sparring partner, Alannah MacTiernan - now mayor of the City of Vincent - was broadly on side. She supports a reduction in the current 30 metropolitan councils but believes the target envisaged by Professor Robson to be too radical.

However she did accuse the premier of being “gutless” for deferring a final decision until April - after the election.

No doubt if Mr Barnett had announced the government would pursue having, say, 15 councils, Ms MacTiernan would have accused him of bulldozing his decision through and ignoring the democratic process. That’s politics.

What would have caused furrowed brows in Mr Barnett’s office was contained in the state’s economic outlook, prepared by the ratings agency Standard & Poor’s. Although the agency revised its outlook on the state’s finances from stable to negative, it did retain a tri-ple-A rating, which enables Western Australia to borrow at a concessional rate.

The sting was in the tail, however. Noting increasing volatility in royalty revenue, mainly from iron ore, the report says the growing reliance on royalties, a strong rise in costs and the time lag linked with declining GST payments, will place increasing pressure on the budget surplus.

That means a one-in-three chance of a ratings downgrade - losing the triple-A - in the next two years. That would be anathema for Mr Barnett, and is why he and Treasurer Troy Buswell are intending to do what would normally be considered unthinkable with the election closing in - working on more spending cuts to be unveiled with the mid-year budget review in December (possibly between Christmas and New Year when the state is on holiday).

It’s now clear that the $328 million in savings in government spending announced by M' Buswell last month will not be enough to ensure the budget stays in surplus. The slide in royalty income, plus the savage cuts in reimbursements for the goods and services tax, will just add to the pressure. And while stamp duties from property transactions are recovering, this won’t be enough to pick up the slack (see table).

So expect more unpopular measures as a New Year present, as Mr Barnett and Mr Buswell work to ‘save’ the budget. Many will remember the fuss at the last election, when Mr Barnett said he would never preside over a deficit budget, although this was later softened to “knowingly preside”.

This means both the government, and Tabor leader Mark McGowan,
will have to come up with election policies containing only modest promises to win votes, and keep the state in the black. It calls for a good marketing job, without much of a positive nature to sell. That does not bode well for the approach by Andrew Forrest to the government for a temporary royalties ‘holiday’ for Fortescue Metals Group.

Mr Barnett confirmed in parliament after a question from Labor Treasury spokesman Ben Wyatt that he had indeed received an approach from FMG for the deferral of royalties.

Experienced Treasury hands say such an approach generally points to a company having cash-flow problems, predicting the government response would be negative.

“The government couldn’t agree to that approach,” one source said. “Just imagine if it did; other companies with some problems would also demand similar treatment. It just won’t happen.”

Nevertheless, even if Mr Barnett was inclined to help, with Mr Forrest being a good corporate citizen etc, his budget is hardly in a position to sustain any unexpected hits; it’s in a parlous state as it is.

So just as their counterparts in Canberra are doing, the state Treasury boffins will be working overtime to keep the finances in good shape and maintain the surplus.
They believe the threat of losing the triple-A should do the trick even if there’s some electoral pain.

They are probably right.

PRIME Minister Julia Gillard’s white paper on the ‘Asian Century’ is full of good intentions and deserves to be followed through; but it also highlights the difference in focus that has developed between Canberra and Perth.

Of course Australia should position itself to take advantage of the economic changes occurring within our northern neighbours. Many Australian companies, especially those linked with mining and based in Perth, have been doing that for years.

The potential goodwill and personal links resulting from the fact that tens of thousands of Asian students attend our universities should not be underestimated.

However Ms Gillard’s push for a more grass-roots component as well, with language and cultural studies at school level, while important - is not unique. Tanguage studies in the past, for example, seem to have been too ad hoc, lacking proper resources for effective follow through.

The number of Australians who still see Asia as a place to fly over en route to Britain and Europe remains surprisingly high.

Premier Colin Barnett has been saying for several years that WA’s future is entwined with the region, and that increasingly the state will be focusing on the north, rather than looking ‘over east’.

Former premier Richard Court seemed underwhelmed by the federal government’s “discovery” of Asia when he told a University of WA forum last week: “We focused on Asia 60 years ago ... we are comfortable in that environment. And we are seeing a growing influence of Asian cultures here in Perth.”

In fact the state government already has trade offices in at least eight overseas countries, six of which happen to be in Asia. There are two trade offices each in both Japan and China, our major trading partners. In addition, WA has sister-state relations in both countries.

Now the federal government is preparing to jump on board. But Ms Gillard must provide the extra resources to build on the foundations already laid if Australia is to get the maximum dividend.