The government can expect the teachers’ union to keep up the pressure all the way till the next state poll. 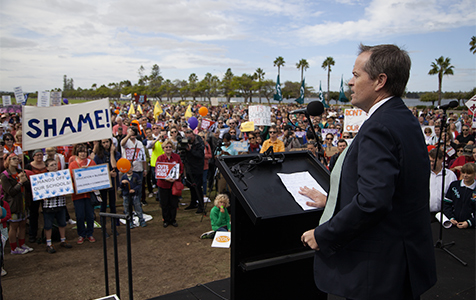 The government can expect the teachers’ union to keep up the pressure all the way till the next state poll.

The strike that closed or disrupted government schools across the state this week is but the start of what is shaping as a concerted public sector campaign against spending cuts. It also shows there’s little gratitude in politics.

In one sense, Colin Barnett and his government are victims of Western Australia’s recent economic success. But the government was also marked down by the respected ratings agency Standard & Poor’s because of concern over the state’s finances, losing the coveted AAA rating.

The need to curb spending, exacerbated by the declining proportion of revenue from the GST returned to the state, is why Treasurer Mike Nahan has been forced to tighten the purse strings.

The government has said that the total being invested in schools is increasing. That may be true, but enrolments have grown so fast in recent years that spending per child has been checked.

And that’s where the problem lies.

Turn the clock back six years to the 2008 state election campaign when teachers were negotiating a new pay agreement. Then education minister, Labor’s Mark McGowan, had made what he considered to be a generous offer. It was rejected, of course, and he was attempting to hold the line. That is until Mr Barnett promised to find an extra $100 million over the life of the agreement. He was Father Christmas.

There is another component in the latest dispute linked with changes in the schools workforce – the introduction of teachers’ aides and assistants. It wasn’t that long ago primary schools had one teacher per class.

With pupils starting younger, however, it was agreed the aides be appointed to ease the workload. At the same time, class sizes were coming down. More assistance was also provided in high schools.

Total staff numbers increased strongly. In fact one former Labor minister told me that, in the life of the Gallop-Carpenter governments, teachers’ assistants numbers increased one year by hundreds. This had caught him by surprise, but was apparently the result of some earlier agreement.

The point here is that the all the extra staff are members of the old Miscellaneous Workers’ Union, now known as United Voice. The union leads the left faction of the Labor Party and is therefore highly politicised. A big group of former United Voice officials now sits on the Labor benches in parliament.

The timing of the recent strike, four days before the Senate by-election was – by accident or design – fortuitous for Labor’s cause. It helped focus attention on school resources, which the government says still compare favourably with other states.

Teachers thanked Mr Barnett for the pay rise in 2008 but now they, and their assistants, think he’s Mr Stingy. Game on.

Honours move out of step

Just what was Prime Minister Tony Abbott thinking when he decided that Australia needed to restore the titles of knights and dames as a reward for outstanding service? He should have consulted premier Colin Barnett first.

Presumably someone got into the English-born PM’s ear and convinced him it would be a sensible move, and that it would be widely accepted by all except rabid republicans.

Wrong on both counts.

First, there was no detectable groundswell of support for the change to the Australian honours system. And second, it sends all the wrong signals to our major trading partners and near neighbours, including those colonised by Britain and who agitated for their independence.

Mr Abbott has said he proposes four awards annually for outstanding service, including for state governors and chief justices. The reason for Mr Abbott’s decision remains a mystery, particularly when his mentor John Howard saw no need to change the honours system during the decade he led the country.

Mr Barnett’s response when questioned on the PM’s move was on the money. In essence he said a modern, confident trading country like Australia did not need to turn back the clock. He also noted that about one third of residents were not born in Australia. Many were born in Britain of course, but if that was the honours system they craved, they might have stayed there. And what do Australians with an Asian or European background think?

Knighthoods in some states used to be awarded to big party donors. One retired Northern Territory politician told me a $50,000 political donation in the 1970s was a strong down payment for a knighthood there. And don’t think such a move was confined to the Liberal Party.

Apparently Mr Abbott did not take the issue to cabinet for endorsement. If he had his colleagues, hopefully, would have told him to forget it. Next time he gets a bright idea, he would be wise to sound out Mr Barnett. He, for one, seems to have his feet on the ground.