The impact on economic development and power prices from a sale of the state’s electricity network could be managed by a strong regulatory framework, Premier Colin Barnett said today, as he continued to reassess his view on the ownership of Western Power. 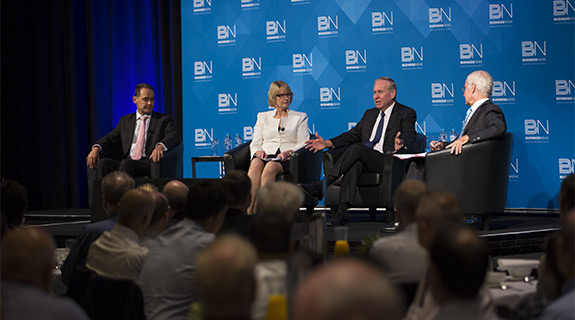 The impact on economic development and power prices from a sale of the state’s electricity network could be managed by a strong regulatory framework, Premier Colin Barnett said today, as he continued to reassess his view on the ownership of Western Power.

Mr Barnett made the comments this morning at a Business News Success & Leadership breakfast.

“I have always been reluctant about the privatisation of Western Power or indeed Synergy,” Mr Barnett said.

“I see them as important long-term assets for the state that generate revenue and an important vehicle for economic development.”

That was particularly the case in regional areas, he said.

But the premier acknowledged that the assets did not need to be in government hands to achieve these outcomes.

“There’s probably ways of handling that through the regulatory regime and the like,” Mr Barnett said.

“We will look at that.

“If we decide to proceed it will be part of this year’s budget.”

He repeated his previous committment that any sale would not take place before the March 2017 state election, however.

“I think probably the community is more ammenable to that, particularly younger people,” Mr Barnett said.

“I think they don’t feel spooked as long as there’s a good regulatory arrangement  and we’ll have to ensure that there’s no threat in terms of prices to consumers.

“In the mean time a couple of years will tick by, and somewhat ironically our GST revenues will start to increase.”

It will not be an easy mission for the premier, with the state's union movement vowing to campaign against a sale.

In a release today, the Australian Services Union and Electrical Trades Union claimed a sale would increase the risk of bushfires, arguing that private companies were less likely to spend on maintenance.

An additional argument was that it would lead to increased electricity prices, the union said.

However, Business News reported earlier this month that there is strong evidence from Victoria and South Australia that electricity network sales will reduce end prices for consumers and business.

In a roughly two-decade period after the Jeff Kennett-led sale in Victoria, network costs fell about 18 per cent in real terms in that state, while they doubled in the state-owned networ in NSW.

“Everyone feels quite emotional about this idea of state debt,” Mr Barnaba told the Success & Leadership audience.

“A state is like a corporation, there is an optimal level of debt.

“We are meant to have some debt on our (the state government’s) balance sheet.”

He said that although the debt was probably higher than it should be, it had mostly been spent on worthwhile investments that would earn a return.

Chamber of Commerce and Industry WA chief executive Deidre Willmott, who also featured on the Success & Leadership panel, was another to give a sale the thumbs up.

She said the government should look to sell assets that would be better managed by the private sector, and that should be the primary reason driving the sale.

That would be the case with utilities, she said, particularly electricity suppliers, which would be subject to huge technological disruption.

Business could better manage that risk, she added.

Mr Barnett gave an update on other sales, too, saying there was some way to go on Fremantle Ports because the sale was complex.

The Keystart loan book, of which about 40 per cent will change to private hands, would not have a dramatic impact on debt yet would free up the state’s capacity to support first home buyers.