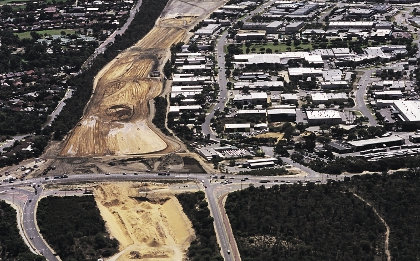 A re-elected Liberal state government would spend $500 million on a suite of road upgrades in Perth’s northern suburbs, in a bid to ease traffic congestion in the rapidly growing area.

The centrepiece of the upgrades, announced yesterday by Premier Colin Barnett and Treasurer Troy Buswell, is a six kilometre dual-carriageway extension of Mitchell Freeway to Hester Avenue in Clarkson.

The $315 million extension, scheduled to commence in 2014-15, will be built with provision for three lanes in the future and is expected to ease congestion on local roads in Clarkson and Butler.

An additional $60 million will be spent on widening Mitchell Freeway by one lane from the Northbridge Tunnel to Vincent Street, Vincent Street to Hutton Street in Osborne Park and Hepburn Avenue to Hodges Drive in Joondalup, with construction set to commence in 2013.

More than $120 million will be spent upgrading sections of Reid Highway. Two traffic bridges would be built at the heavily congested Reid Highway and Malaga Drive intersection, ranked as one of the most dangerous traffic spots in Perth and the site of almost 400 crashes in the 10 years to 2010.

Also announced was a duplication of the two kilometre single-lane carriageway on Reid Highway between Duffy Road and Erindale Road. About 30,000 vehicles per day travel this section of Reid Highway, which is more than twice the recommended level for a two-lane road.

The planned road upgrades accompany previously announced public transport infrastructure upgrades in the northern suburbs, including an extension of the Joondalup train line to a new station at Butler and the construction of a light rail linking Mirrabooka with the CBD.