Barnett goes off a bit early

Tipping a commodity price recovery that will boost Western Australia’s economy is a game for the brave or the foolish; and while Colin Barnett came close to being one or the other yesterday, he was actually just being premature. 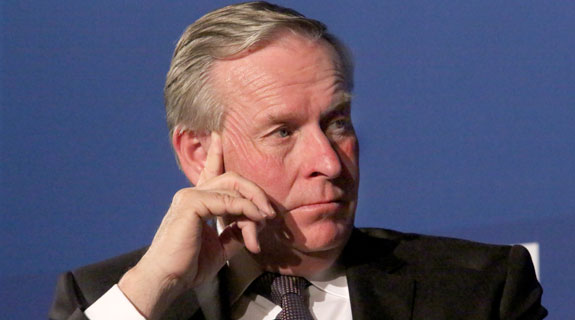 Tipping a commodity price recovery that will boost Western Australia’s economy is a game for the brave or the foolish; and while Colin Barnett came close to being one or the other yesterday, he was actually just being premature.

The premier’s comment about commodities, which made a few headlines, was along the lines of his not being “brave enough or silly enough to suggest that we have hit the bottom” in the price cycle, which has made life difficult for the mining industry.

“The next 12 months will be a period of some risk,” he said when opening the annual Africa Down Under conference in Perth.

“Some things will work out and some won’t, but I expect at the next ADU there’ll be a lot for optimism around.”

‘Perhaps’, is the correct way of interpreting his forecast of increased optimism; because while there are indications of better times ahead, it will take a painfully long time to reach the tipping point and for recovery to get under way.

Signs that point to higher prices and greater resources sector activity include a decision by some of the world’s best investors to divert a small portion of their extreme wealth into commodities.

Carl Icahn, one of America’s richest men, last week plopped $US1 billion on the table to snap up an 8.5 per cent stake in Freeport McMoRan, a copper miner. Warren Buffett, another super-rich American, spent $US4.5 billion investing in a business that operates oil refineries and pipelines, while George Soros, a third super-rich investor, placed a couple of small bets (just a million dollars here and a million dollars there) on two US coal miners.

Another hint that a turn for the better is on the way, once China gets its house in better order, is the extreme volatility in commodity markets, with oil prices gyrating wildly – up over $US50 a barrel one day, and then down to $US40/bbl the next.

In the same way oceans are stirred by tidal movements, commodity prices are disturbed when buyers and sellers can’t agree on prices and trading turns unpredictable until a new overall trend emerges, up or down.

But the test some people find most useful can be found in the earnings of resource companies, a measure that determines how much cash there is for investment in new production, and how much is available for dividends.

During the past 12 to 24 months it has been all about dividends, with investment bank Credit Suisse describing the high rate of dividend payments as a ‘deluge’ as institutional investors and privately owned pension funds demanded (and got) showered in cash.

It is, of course, a process that cannot continue, because paying out as much as you earn (or even more than you earn in the case of BHP Billiton) means you either have to do it by raising debt levels, or by abandoning future investment proposals, or both.

At some point earnings per share (EPS) must rise if dividends per share (DPS) are to be maintained, and that’s when another study into the outlook makes Mr Barnett’s commodity price forecasting efforts look good, albeit early.

Citi Research, in a report published yesterday into Australian equity market (stock market) strategy, suggested that the recovery in resource company earnings has been pushed back by the most recent downturn in prices.

In mid-June, Citi was tipping that EPS would remain in negative territory next year, declining by 13.5 cents per share for resource companies, which was better than the 23.4 cents per share decline in 2015.

Earnings will still be shrinking, but shrinking at a slower pace, and with 2017 looking to be the first of the positive years when EPS could grow (by 38.6 cents).

They were the June forecasts. Yesterday, Citi updated its EPS tips with a much worse result expected in 2016 when average EPS are likely to decline by 32.8 cents per share, while 2017 could turn out to be a boom year with EPS soaring to 52.1 cents.

All forecasts are just that, forecasts. Or as Danish physicist Nils Bohr so famously once said: “Prediction is very difficult, especially if it’s about the future”.

However, what the Citi EPS forecasts have done is simply shift the recovery a bit further into the future, meaning that 2016 will be another tough year of low profits and limited investment in projects, whereas 2017 could be the lift-off point.

For Mr Barnett, who would obviously like to see the recovery come sooner rather than later, 2017 might not be too late so suit his political agenda – because that’s the year he will either stand again as premier at the March state election, or stand aside.

From a political perspective, it might actually be more beneficial to see 2017 as the year when the EPS recovering shows up in earnings; which might mean that 2016 is the year when prices start to recover, and in politics its far better to have an upward trend than to have arrived at a turn, or to be heading down.

Having said all that, don’t forget that it’s the brave or the foolish who try and predict the future.