Barnett bullseye on oil and gas

Managing community relations is proving a major challenge for oil and gas companies, and there’s a lot of goodwill to claw back. 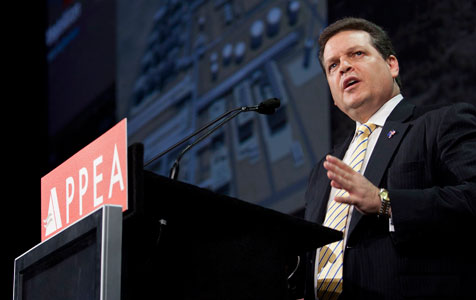 PLAYING CATCH-UP: Chevron is targeting its message to better communicate with an Australian audience. Photo: iStockphoto

Managing community relations is proving a major challenge for oil and gas companies, and there’s a lot of goodwill to claw back.

Leaders of Australia’s fast-growing gas-export industry may well have discounted last week’s warning from Colin Barnett about the need to work more closely with government.

If they fail to heed the premier’s message, however, it could be the biggest mistake of their careers.

Reaction so far from oil and gas insiders to Mr Barnett’s speech about their industry has been whispered criticism of the premier along the lines of ‘what would a politician know about us’?

Instead, however, senior executives at companies such as Woodside Petroleum, Chevron, Exxon, and BHP Billiton ought to be asking themselves a different question: ‘what do we know about government and community relations’?

If a score were allocated to both sides of what has the potential to become a damaging divide, Mr Barnett would probably get seven out of 10 for understanding business. Oil and gas leaders, especially those from overseas, would be lucky to score three out of 10.

Two case studies illustrate the lack of understanding in the oil and gas industry about how Australia works and why Mr Barnett was correct in suggesting that industry executives “stop reading American management books”.

In Queensland and New South Wales the gas industry has totalling misread community and government views on the extraction of methane (natural gas) from coal seams and beds of shale under prime farmland.

In WA, the oil and gas industry has led the community down a blind alley by promising to develop a gas hub in the Kimberley, only to abandon its commitment and opt for floating LNG technology that will generate few local jobs.

There a very good reasons for Woodside switching from an onshore to an offshore development strategy for the gas it has discovered in the Browse Basin, but the way it has handled community and government relations over the matter has been appalling.

The same can be said of the east coast coal seam and shale-gas debate, where oil and gas industry leaders appear to have thought they could bypass local communities and state governments because they believe they’re developing a nationally significant export business that only requires national government approval.

Two big industry mistakes on different sides of the country have turned what should be Australia’s most important earner of export income into a business that few people in the country understand, while those who do understand it mistrust it.

Or, to put it another way, two own goals to oil and gas.

It’s not hard to understand how the oil and gas industry is blotting its report card so badly, with the primary reason being that it is an international business run by people used to working in third-world countries where local community opinion can be suppressed by government, or the judicious distribution of money to the right people.

In a way we’re seeing that now in WA, albeit in a more nuanced way, with heavy-duty advertising by companies such as Chevron on how much it cares about the community. Or as Mr Barnett suggested, there is a need to deal more openly with government and spend less on building children’s playgrounds and trying to apply an American solution to an Australian issue.

It is unlikely that Mr Barnett’s message penetrated far below the surface with the oil and gas industry, which sees itself as an international business with little time for government, and is adept at circumventing local issues and ignoring local opinions.

But what the premier did last week was expose the Achilles Heel of Australia’s most important industry of the future, with his most telling observations that:

• on the east coast, the gas industry is trying to argue that it needs to increase production from under prime farmland without paying the same sort of generous compensation that is paid to American farmers, and then exporting the gas to Asia while asking the locals to pay more for the gas produced locally;

• in WA, it is arguing that locally produced gas should be extracted by a foreign-built barge, probably staffed by foreign crews, converted to exportable LNG, with no gas sent ashore and few local jobs created; and

• nationally, there seems to be a total misunderstanding in the oil and gas industry about the demarcation between state and federal powers, especially recognition that it’s the states that control land-use laws.

If no-one in the oil and gas industry is tuned in to Mr Barnett’s message, and imagines that they can ignore him because he probably will not be premier for much longer, then they are making a dreadful mistake because whoever is the next premier will be even less friendly to an industry that is running out of friends.

If the oil and gas industry faces a heavy lift in winning back local support, then it could get some comfort from looking at the task senior management at Seven Group Holdings has set itself by declaring that it wants to copy Wesfarmers in developing a new energy arm.

Easy to say but hard to deliver, there have been frequent attempts to recreate the classic diversified industrial structure, which Wesfarmers has managed to do while everyone else has failed.

Even a former chairman and chief executive of Wesfarmers, Trevor Eastwood, tried to turn a small company, Avatar Industries, into a mini-Wesfarmers in the 1990s, but without success.

Seven might be able to replicate Wesfarmers but the ownership structure of the group is pointer to its likely failure, with Seven’s share register dominated by the Stokes family whereas Wesfarmers has always had an open share register and management selection based solely on proficiency, rather than being influenced by surname.

The arrival of Chinese cars such as Great Wall and Chery in the Australian market is being replicated in another industry segment, with the arrival of Chinese-made heavy earthmoving equipment in a business currently dominated by American and Japanese manufacturers.

Komatsu and Caterpillar are not yet feeling the heat from Sanha or XCMG, but they will because big mining companies such as Antofagasta in Chile and Rio Tinto in Australia are starting to source more of their equipment from China for the same reason private car buyers are buying Chinese – it’s cheap and the quality is improving.