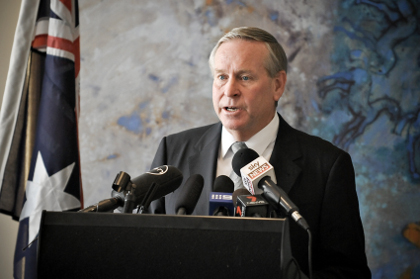 Mr Barnett made the comment in response to Prime Minister Julia Gillard announcing a clampdown on the 457 visa program for temporary foreign workers, aimed at ensuring Australian workers get first preference for jobs.

While federal Treasurer Wayne Swan says he has "personal evidence" Australians are having trouble finding work in mining and other industries because overseas workers are filling jobs, Mr Barnett has not only stuck up for FIFO workers, but has also said the foreign labour is essential for WA's $237 billion economy.

Hitting back at what he said was a campaign of vilification of the FIFO workforce, Mr Barnett said those people should instead be lauded.

"They do separate from their families, they do put up with some loss of amenity, they work in harsh conditions, for long hours, doing exciting work.

"They are building this state and building this nation. You can draw a parallel with the migrant workers on the Snowy Mountain scheme - these are the modern day heroes of the economic development of Australia.

"They deserve more respect, and not to be treated like some scourge of the earth."

James Pearson, chief executive of the WA Chamber of Commerce and Industry, said he understood from the immigration department that "something less than one per cent of employers have been abusing the system".

Mr Barnett said rather than clamp down on foreign workers who were willing to come to Australia to fill the positions, the government should be asking why more Australians were not willing to move where the high-paid work was.

"They (457 visas) are essential for WA in particular and we have been a big employer of 457 workers, and they go across a who lot of areas, trades, engineers, a whole scope of works," Mr Barnett said.

"That is one of the weaknesses of the Australian economy."

Mr Barnett also indicated a re-elected Liberal state government would fight the federal government over its proposed anti-gang laws. He said he would support parallel laws but wouldn't hand over powers.

"Let us have ... more national policies that actually deal with the issue, rather than this grab for power that we have seen in disability and in education," Mr Barnett said.

Meanwhile, Labor leader Mark McGowan has denied he or his party are behind murmurs that Mr Barnett is in ill-health, ahead of Saturday's election.

With three days to polling, and all major policy announcements made, the election focus has turned to the premier's health, as rumours continue about how the 62-year-old was holding up as the campaign draws to a close.

The opposition has speculated that Mr Barnett, if re-elected, will hand over power to Treasurer Troy Buswell within the next four years.

Mr McGowan denied he had said anything about Mr Barnett's fitness - or been a party to such comments - although he maintained his disdain for Mr Buswell and belief he was the premier's political heir.

He said Mr Buswell had overseen record debt and traffic congestion, and was the only minister constantly in the news for the wrong reasons.

Mr McGowan also said the Liberal party's privatisation track record was irrefutable, and promised to ban it if Labor won power on Saturday.