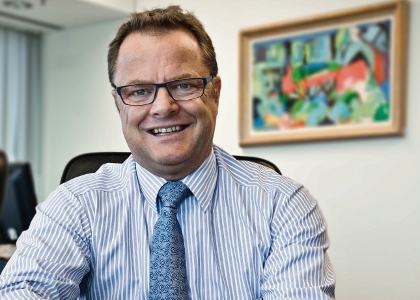 Bank of Queensland today announced another step in the rebuilding of its senior management group, in tandem with unveiling a $91 million half-year loss and a large capital raising to bolster its balance sheet.

Today’s announcement helps to clear up the circumstances of Mr Sutton’s unexpected exit from Bankwest.

When his departure was announced in January, it was stated that he would be taking a senior role with Bankwest parent Comonwealth Bank.

Mr Sutton will be one of five senior executives recruited this year by Bank of Queensland managing director Stuart Grimshaw.

Three of the new recruits are from the Commonwealth Bank, where Mr Grimshaw had also worked earlier in his career.

The new management group will be charged with reviving Bank of Queensland, which said it expected to incur a $91 million loss in the half-year to February 2012 ($48 million profit in pcp).

The loss was driven by an impairment expense of $328 million, including a $160 million “collective provisioning overlay”.

This followed a detailed assessment of the bank’s higher risk exposures and segments, and was a “prudent response to the continued weakness of the Queensland economy, retail and commercial property markets”.

Its normalised underlying profit was $222 million ($216 million in pcp).

Its operations include the retail and small business banking operations it acquired in WA via the takeover of Home Building Society.

In order to bolster its balance sheet and lift its capital ratios, the bank plans a $450 million capital raising, via a placement and entitlement offer.