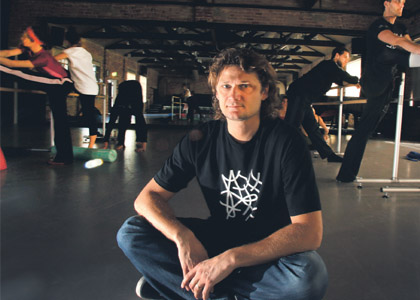 REPUTATION: Aurelien Scannella says Perth is well-known in Europe, particularly France, for its support of the arts. Photo: Bohdan Warchomij

WEST Australian Ballet’s new artistic director, Aurelien Scannella, says his first Australia Day celebration in Perth was an eye opener, not just for the fireworks or flag-waving, but also because of the sheer number of cultural events taking place across the city.

The events, which are part of the Fringe World Festival, confirmed to Mr Scannella, a Belgian ballet master, that Perth is a hotbed of cultural activity.

Mr Scannella said the city was well-known throughout Europe, particularly in France, where it was often termed the ‘‘Saint-Tropez of Australia’’.

“For us Australia is seen as a young country with a lot of energy”.

Arts funding and activity has fallen off dramatically in Europe because of the financial malaise afflicting the continent.

By contrast, the Western Australian economy is in good shape and the arts sector is a major beneficiary of this.

Mr Scannella said while Australians had a tendency to look to Europe when it came to art, we should look in our own backyard instead.

He has spent the past 20 years travelling the globe, performing and teaching in ballet companies in France, Hong Kong, Belgium and Sweden. For the past five years he has been freelancing, travelling without his wife and dance partner, Sandy Delaselle, and young son, Matteo.

Now he has decided to settle down with his family in Perth, taking on an artistic director’s role for the first time.

“Australia is the only part of the world where I have never performed or visited,” said Mr Scannella, who was appointed in August last year but only took up his new role last month.

“It was always a wish for me to discover the country and to be an artistic director.”

His predecessor at West Australian Ballet, Ivan Cavallari, resigned mid last year as the company celebrated its 60th anniversary. Mr Cavallari will lead the Ballet du Rhin in Alsace, France, in order to be closer to his family.

Under his direction, the company underwent significant change, not only in terms of the size of the company but also in its reputation.

Mr Cavallari sealed his six-year legacy with the move to refurbished premises in Maylands in April 2012. The heritage-listed site was formerly occupied by the WA Royal Institute and Industrial School for the Blind but now fulfils the company’s long-overdue need for a professional facility and proper home.

“I just know one company in Europe which has something like this - the ballet in Monte Carlo,” Mr Scannella said.

“Otherwise, no-one has such a facility.”

The dancers were expected to participate in the background of opera productions, whereas Australia’s comparative lack of an opera scene offered greater opportunities for dancers to perform as independent acts.

After only four weeks in the role, Mr Scannella is already planning ahead for the next few years.

Despite Perth’s healthier economic climate, the West Australian Ballet is still facing monetary issues, which Mr Scannella hopes to overcome by collaborating with international companies to share the financial burden.

Mr Scannella is not the only European to make the move to Perth for an artistic career over the past few years.

This has encouraged international artists to not think of Australia as “out of the loop”.