Perth business leaders are using a challenging yacht race to test their ability to control risk and get the best out of their team. 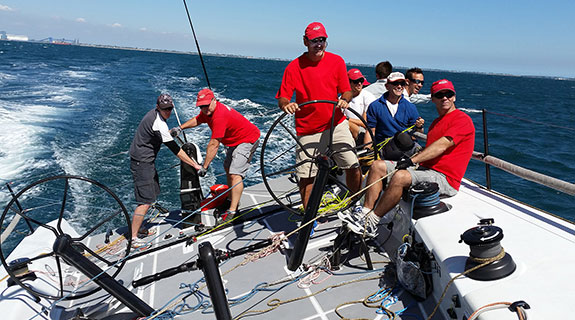 HEADING NORTH: Craig Carter at the helm of ‘Indian’, which is one of 19 yachts racing to Bali.

Perth business leaders are using a challenging yacht race to test their ability to control risk and get the best out of their team.

Perth businessmen Craig Carter and Mike Giles have set out on one of Australia’s longest ocean races in a bid to apply the leadership skills they have gained in the corporate world to a competitive sporting environment.

The pair is among the crew on two of the 19 yachts participating in the Fremantle-to-Bali race, which covers 1,400 nautical miles (almost twice the distance of the Sydney to Hobart classic).

Aside from the race itself, the event has a significant ‘giving’ component, with all those taking part making material donations for distribution upon arrival in Bali.

When they arrive in Benoa harbour, Mr Carter and Mr Giles will be among those providing gifts of educational books, fishing equipment, snorkels and masks, soccer balls, stationery and clothes to local children.

Mr Carter, a former Macquarie Bank senior executive with directorships at Fremantle Dockers and Australian Finance Group, will be aboard his 47-foot yacht ‘Indian’, which placed 17th, out of 118 starters in the 2014 Sydney to Hobart.

Mr Giles, managing director of Diverse Engineering, will be competing aboard his 47ft yacht ‘Endorfin’, which placed 41st in last year’s Sydney to Hobart race.

Organised by the Fremantle Sailing Club, the race got under way when the yachts left Fremantle on May 18, having been delayed for 48 hours by intense weather conditions.

Mr Giles told Business News along with detailed planning for the race, his most valuable job was encouraging his crew of nine – aged from 24 to 67 with a range of occupations that included IT business owner, mechanical fitter, public servant, office administrator, carpenter and retired engineer – to strive for excellence.

“The crew settles into a pattern where everyone knows their role and must get fully in tune to the nuances of weather changes, the feel of the boat, and what needs to be done to get her sailing her best for the conditions, which are continually changing,” he said.

“It is all about teamwork and communication, with the crew having an absolute desire to get the best out of the boat in each race.