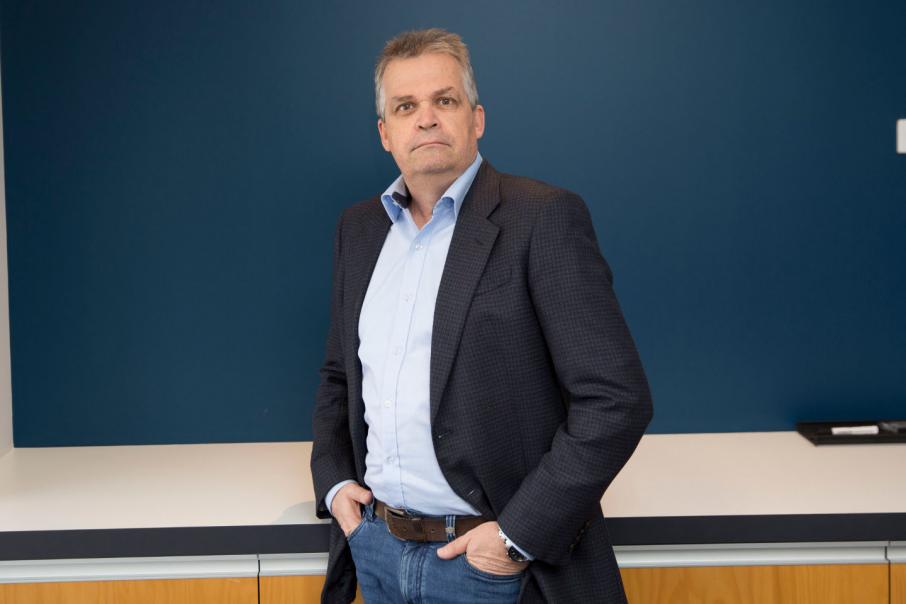 A medicinal marijuana hopeful that listed on the ASX via the backdoor earlier this year has led a field dominated by mining stocks in the latest ranking of total shareholder returns in the BNiQ Search Engine.

Business News uses the TSR metric to judge company performance because it accounts for both capital gains and dividend payments to shareholders, a more useful indicator than share price. Click here to see the whole list.

With a list that includes a broad range of companies from lithium player Tawana Resources and mini-satellite business Sky and Space Global, it was cannabinoid producer AusCann Group Holdings's stellar run since a backdoor listing at the start of this year that topped the list on one-year performance to June 30 2017.

The company scored a 34-fold return for investors, additionally ranking second on the list over three years. 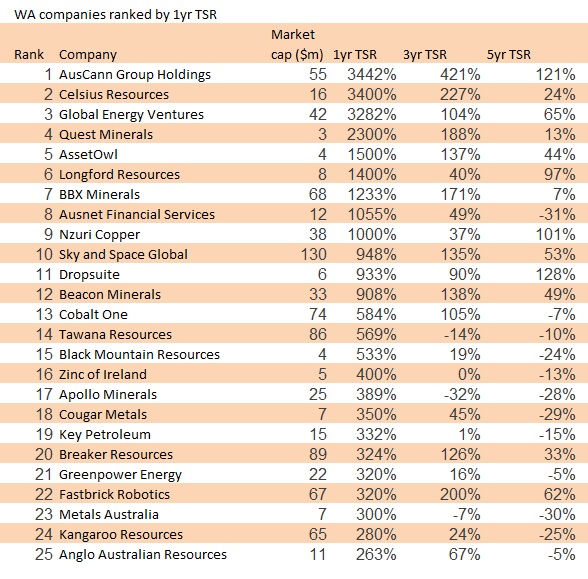 Interestingly, the vehicle through which AusCann entered the bourse, TW Holdings, featured in 25th place on the Business News list last year with a one-year TSR of 548 per cent.

Part of the rise in TW Holdings’ share price followed its announcement in March 2016 that it would be pursuing the AusCann deal.

Additionally, the rise meant AusCann’s market capitalisation grew to be around $55 million, one of the few companies above $50 million to be in the top 25 positions on the list.

AssetOwl, Sky and Space Global, Ausnet Financial Services and Dropsuite were four further backdoor-listed businesses that made the top 15 rankings this year, bringing the number of backdoor-listed companies in the top 15 to five.

That was up from two in 2016 – seafood play Mareterram and medical company ResApp Health, which both featured among the top three.

The rise in backdoor-listed technology businesses reduced the presence of resources companies at the very top of the list, with nickel hopeful Celsius Resources leading the group with a return of 3,400 per cent.

Nonetheless, resources businesses kept a strong presence in the top 50, with 36 positions, compared with 38 this time last year.

The majority of those have a gold focus, while base metals including cobalt also feature.

Just one lithium-exposed business is in the top 50 this year, down from two last year (Altura Mining and Pilbara Minerals).

Ranked 15 on the list overall, Tawana Resources is also the fifth-best performer among companies with market capitalisations above $50 million.

It has been a year of change for Tawana, with Mark Calderwood appointed chief executive officer in July 2016, as the company made a move into the lithium space.

“I came with the new project; it allowed (Tawana) to change from iron ore to lithium,” Mr Calderwood told Business News.

Tawana’s lithium project is Bald Hill in the Goldfields, where the miner has earned a 50 per cent interest in the tenement’s lithium rights from Singapore-listed Alliance Mineral Assets by spending about $7 million on exploration.

Alliance hopes to refurbish an existing plant at the site to produce tantalum. 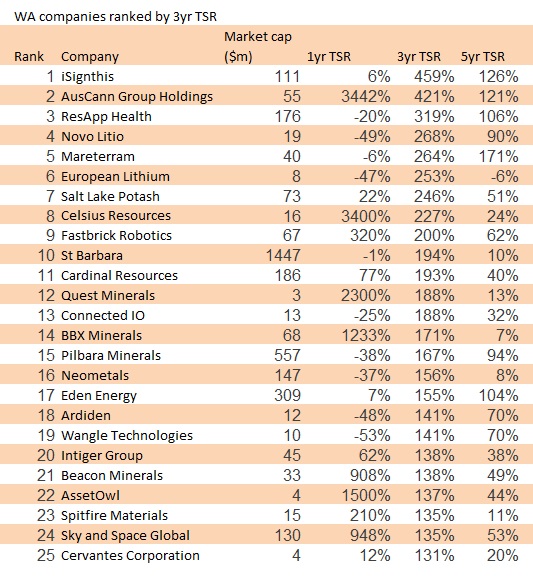 Mr Calderwood, who was formerly boss of Perseus Mining, said he became involved with Tawana when he introduced it to the project, one he’d been working on for some time.

“They needed a new direction, so we just got together,” he said.

Mr Calderwood said he had a fair bit of experience in lithium at that point, and knew the project needed a company to back it.

“It’s quite an advanced project, and basically in less than 12 months we’ve gone from no lithium drilling to start of construction of the processing plant,” he said.

“The guys are on ground now, site works are starting to kick off now and we’ll be in production in February next year.”

Tawana raised $15 million in April, bringing the amount of new capital it has garnered since last June to about $23 million.

“It’s going to be used towards construction mostly, that money,” Mr Calderwood said.

The total capital expenditure for the Bald Hill project will be about $40 million.

“Some of that money comes from money that we raised, plus some prepayments by product offtakers,” he said.

The offtaker was a Hong Kong-listed company that had traditionally been a major buyer of Fortescue Metals Group iron ore, and had recently moved into the lithium business, Mr Calderwood said.

He predicted the coming year would be a positive one, as the project became more ‘real’ as it entered production, while further projects were in the pipeline.

“As we de-risk over this next 12-month period, you should see a fairly decent year; obviously you won’t get your 10-bagger, but it’ll be a fairly significant year I think,” Mr Calderwood said.

Despite a recent flattening of the lithium price, the commodity joined cobalt and gold as the best performers, Mr Calderwood said, driven by the interest in electric vehicles, where it is used in batteries. 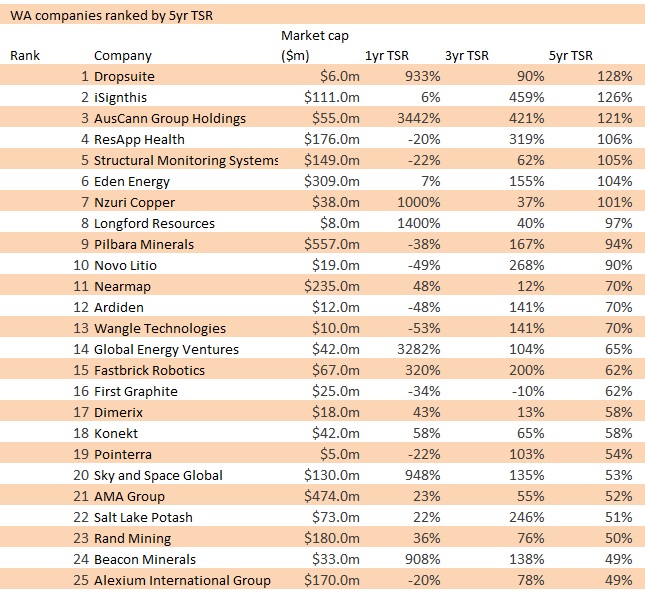 Contractors Ausdrill and Monadelphous Group were the best performers among the state’s largest businesses, with Ausdrill’s 158 per cent one-year TSR enough to lift it in the top 50 best-performing ASX-listed businesses on BNiQ.

Monadelphous shareholders nearly doubled their money during the 2017 financial year, with a return of 98 per cent.

In both cases, however, the gains only partially offset negative performances during the past five years as the mining boom wound down. 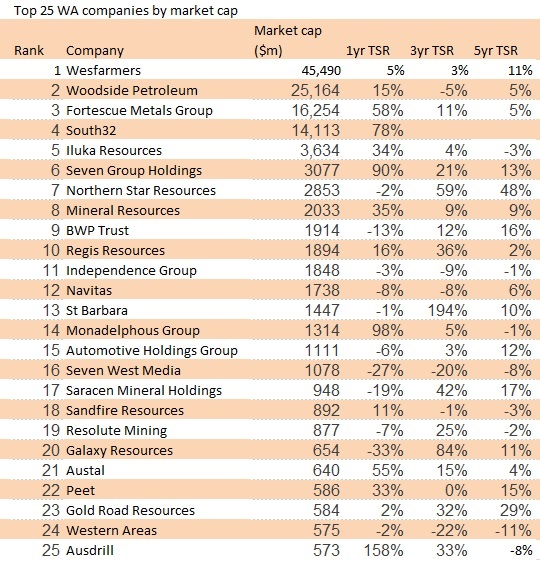 Seven Group Holdings, which owns contractor Westrac in addition to a slice of media empire Seven West Media, performed well, with a one-year TSR of 90 per cent.

The Westrac portion of the business was the likely driver of that gain, however, as Seven West Media itself posted a one-year TSR of -27 per cent.

Iluka had suffered from low mineral sands prices for a number of years, and in recent weeks was hit with a $150 million impairment on a Victorian separation plant.

Yet the company has had some good news in the past financial year, completing a takeover of Africa-focused Sierra Rutile and moving to restart mining at an operation in South Australia as prices recover.

Not all resources companies were on the up, however, with a number of gold miners coming back off a few years of significant gains.

Part of that could be due to a softening of the US dollar gold price, while Australia’s exchange rate appreciated around 2 cents against the $US in the 12 months to June 30, marginally lowering returns for local miners.

Gold-exposed Independence Group posted a negative return at -3 per cent for the year (five-year TSR of -1 per cent).

Lithium play Galaxy Resources was also down, with a one-year TSR of -33 per cent (up 11 per cent for five years).

The state’s largest business, Wesfarmers, which owns Coles supermarkets, posted a middling performance for such a large company, a one-year TSR of 5 per cent, and 11 per cent over five years.

Among the prominent non-resources businesses were land developer Peet, which came in with a one-year TSR of 33 per cent, and shipbuilder Austal, with a one-year return of 55 per cent.