Developers are tipping the next wave of demand for apartment projects to come from two very disparate demographics – baby boomers close to retirement and generation Ys looking to get on the first rung of the property ladder. 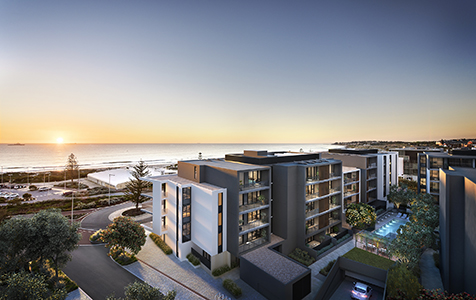 LIFESTYLE: Beachside projects like Mirvac Group’s Latitude at Leighton are proving to be a significant draw for baby boomers.

Developers are tipping the next wave of demand for apartment projects to come from two very disparate demographics – baby boomers close to retirement and generation Ys looking to get on the first rung of the property ladder.

“There are 100,000 to 200,000 semi-retired or close to retirement baby boomers that will be looking to downsize over the next five years into an apartment,” Mr Blackburne said.

“They don’t need all their gardens and they can get a new apartment with really nice resort-style common facilities, with good views, for a lesser price than what their home is worth.”

He said sales at Blackburne’s $145 million Aria project in Swanbourne provided a good indication of the trend.

“About 70 per cent were sold to owner-occupiers that live within a five kilometre radius,” Mr Blackburne said.

“That’s a huge growing market – owner-occupiers downsizing out of their homes.”

Edge Visionary Living director Gavin Hawkins said baby boomers looking to downsize had been hesitant to sell their homes and downsize since the GFC, but current market conditions were facilitating a major change, especially in Perth’s prestigious western suburbs.

“In the last couple of years there has been some liquidity in the upper end of the market,” Mr Hawkins told Business News.

“It’s not flying, but there is a market there and that’s going to be the real push.

“Anecdotally, people that I’m talking to aged 50 to 60 are all talking about apartments, whether that’s Aria in Swanbourne or Claremont or Perry Lakes … it’s starting.

“Three or four years ago there was no such talk, so there is a march of people trying to find that cheaper apartment with their nest eggs so they can lock up and go travelling.”

ABN Group managing director Dale Alcock said there was a similar push for apartment living occurring among young people in their early 20s.

“What you’ll see is a developing and emerging sophistication of the market where you see smaller and boutique offerings that appeal to people who may be ageing or young people looking for their first entry into the real estate market,” Mr Alcock said.

“When we start to see the transition of the next generation into apartments as their primary thought, that’s really exciting for me.”