Western Australia’s listed companies have trailed the broader market in the past year, with the Business News BN30 index rising 5.2 per cent as the ASX 200 lifted 7.2 per cent. 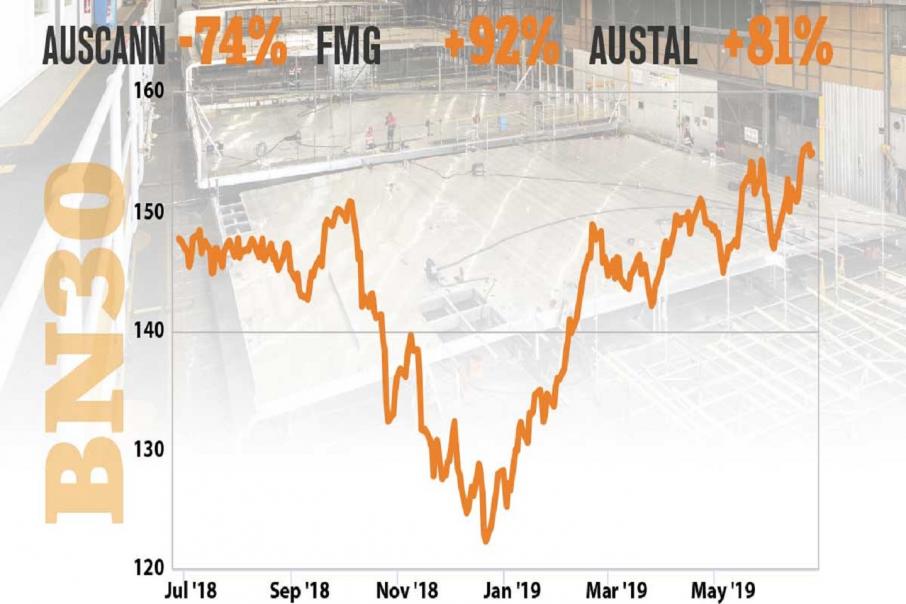 The BN30 index over the past year.

Western Australia’s listed companies have trailed the broader market in the past year, with the Business News BN30 index rising 5.2 per cent as the ASX 200 lifted 7.2 per cent.

The BN30 tracks 30 companies selected by Business News across a variety of industries, weighted by share price, to give an idea of the state’s economic outlook.

The index hit 154.9 on June 26, meaning the bag of stocks have gained 54.9 per cent cumulatively since it was first launched in January 2016.

Over that longer period, WA businesses have strongly outperformed the ASX 200, which was up 26 per cent to close at 6640.5 on June 26.

In the 12 months to the end of June, Fortescue Metals Group was the best performer, with shares up 92 per cent on the back of a run of project approvals and a strong iron ore price.

Over the same period, iron ore rose 65 per cent to be nearly $US108 per tonne.

But 21 of the 30 businesses tracked on the index went backwards during the year.

Auscann Group Holdings led the way, down 74 per cent.

FBR shares fell 60 per cent after construction business Caterpillar cancelled a deal to use the company’s robot bricklaying technology.

The company will exit the BN30 list at same time as Navitas, which was bought-out by a group led by private equity firm BGH.

Among other businesses to suffer share price drops, Seven West Media was down 46 per cent and Western Areas fell 42 per cent.

The biggest share sale in the past three months was by Pilbara Minerals chief executive Ken Brinsden, who sold $5.6 million of shares in April after exercising a stock option.

On the other side of the ledger, Mineral Resources director Tim Roberts picked up $18.9 million of stock in a transaction in May.