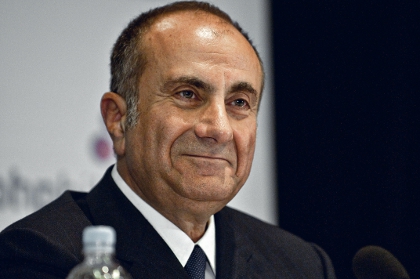 BHP Billiton chairman Jacques Nasser says the global miner will not spend the $80 billion on growth projects that it said it would, stepping back from previous commitments.

Mr Nasser, speaking in Sydney, said there was reconsideration "every day" of the company's stated 2011 plan to spend $80 billion on growth projects up until 2015.

"When (BHP Billiton chief executive Marius Kloppers) talked about that $80 billion ... the environment was different," Mr Nasser told reporters after an address to the Australian Institute of Company Directors (AICD).

"The second thing is investors were saying where are the growth projects?"

Asked if BHP was still intending to spend $80 billion over the next five years on growth projects, Mr Nasser said: "No."

Mr Nasser's speech followed a presentation last night in the US by Mr Kloppers, in which he maintained a positive view on the group's medium term prospects but expressed caution about the long-term outlook.

Mr Kloppers' presentation referred to the "strong momentum we expect to maintain in our major businesses".

It stated that the drivers of demand for mineral commodities, including global urbanisation and rising Chinese steel production out to 2025, remain intact.

"Longer term, post 2025, the combination of a plateau in steel use in China and increasing scrap availability is likely to result in a protracted period of low to negative growth for the seaborne iron ore market," he told the Merrill Lynch conference.

The presentation referred to "numerous" options for growth, including its WA iron ore business, its Olympic Dam copper/uranium project in SA, its Canadian potash project and its US shale business.

It stated that the completion of 22 major growth projects currently underway would give the group flexibility.

"Projects will be aproved in a sequence that maximises value, reduces risk and balances short and long term returns."

Mr Kloppers also signalled that the group would continue to review options for divesting businesses.

Meanwhile, Mr Nasser also said the Australian mining industry was "fighting for our survival" during negotiations with the Gillard government over the Resources Super Profits Tax in 2010.

"It would have meant the effective nationalisation of the resources industry in Australia," he told the AICD luncheon.

Mr Nasser said the tax, which was watered down into the Minerals Resource Rent Tax, had not yet affected any investment decisions but"it could" affect future decisions.

He said the company was still evaluating the impact of the carbon tax, which comes into effect on July 1.

"It just makes it more difficult," he said.

He said this was particularly so in Australia, which he described as "one of the higher cost countries in the world".

He said the industrial relations environment had become increasingly difficult, with the company facing 3,200 "incidents of industrial action" at its Queensland coal operations in the past year.

A company spokeswoman later confirmed the figure of 3,200 related to incidents and not individuals involved.

"While governments have the right to make tax and royalty decisions, those decisions have repercussions," he said.

The mining boss went on to say that BHP Billiton had more projects than it could fund and so had to make choices.

He said the company took seriously its "responsibility to discover and develop the commodities owned by all Australians".

However, "given our range of options", if a project did not meet all the required criteria the company would invest elsewhere or not at all, he said.