The mining giant says it’s about heritage, but the new moniker for its less-loved assets shows the management team has plenty of latitude. 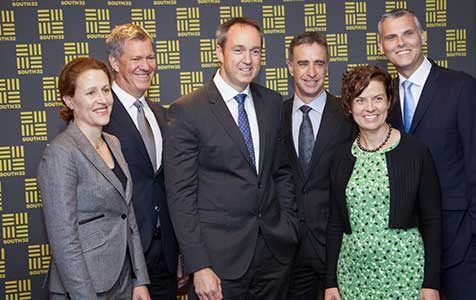 BHP Billiton has revealed the name of its new Perth-based spin-off company as South32 and claims the demerger is on track for a May vote despite the crash in commodity prices.

South32 CEO-in-waiting Graham Kerr said the new name was a variation on an in-house suggestion and reflected the geographic heritage of the majority of assets that would form the new business.

Most of BHP's aluminium, coal, manganese, nickel and silver assets that will comprise South32 are located in the Southern Hemisphere nations of Australia and South Africa, which are linked by the 32nd south parallel.

In taking questions from the press at the Rydges Hotel name launch in Perth this afternoon, Mr Kerr said the proposed decoupling of South32’s assets from the main BHP Billiton stable still made sense despite the crash in prices for the major commodities that were to remain with the parent group – iron ore, coal and petroleum.

He said a key benefit was that shareholders would be be able to make a choice about the commodity cycle via the share split.

Mr Kerr said the commodity price issue had not threatened the demerger process.

“The demerger remains on track to be completed in the first half of the 2015 calendar year. Following the recent announcement of additional members of our experienced and high-calibre senior executive team and the third party approvals already achieved at this stage, we are progressing well against plan,” he said.

Mr Kerr said that while company’s name represented this footprint and its regional approach to managing its operations, it would not constrain it operationally.

South32’s head office will be in Perth with a regional head office and global shared services centre located in Johannesburg, South Africa. South32 would be incorporated in Australia with a primary ASX listing, but it also intended to have a secondary listing on the Johannesburg Stock Exchange and a standard listing in London.

The company said a final BHP Billiton board decision on the proposed demerger would be made once all necessary third party approvals, such as those from the Foreign Investment Review Board and Australian Tax Office, were secured on satisfactory terms.

On this basis, BHP Billiton expected to release all shareholder documentation with full details of the proposed demerger in March 2015, with a shareholder vote taking place in May.