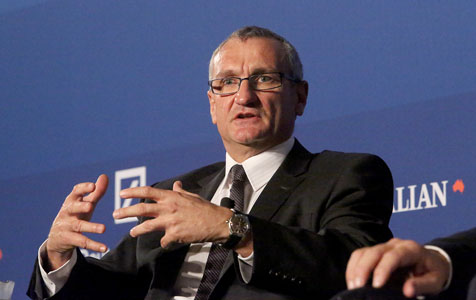 Already-low iron ore prices fell below $US60 per tonne this week. The tight conditions have already reduced tier-one miners’ profitability and forced many mid-tier miners to be operating at a loss.

Citigroup's global head of iron ore, Paul Lyons, told the conference iron ore prices would drop to $US55/t in 2016, with the floor price of the steel-making commodity hitting $US50.

"To move up to $US60 to $US70 will require a turnaround in China's property market, which will require cuts to interest rates," Mr Lyons said.

The pricing environment is expected to result in about 85 million tonnes of higher cost, mostly Chinese domestic iron ore production exiting the market, in addition to about 125mt that exited in 2014, Mr Harding said.

Mr Wilson is also expecting about 80mt of higher cost iron ore production to exit the market this year.

Neither Mr Harding nor Mr Wilson would be drawn on whether WA’s high-cost mid-tier miners, such as Atlas Iron, BC Iron and Gindalbie Metals, could be included in that figure.

Both Rio Tinto and BHP reiterated their commitment to ramping up to 360mt per annum and 290mtpa respectively, a strategy condemned by smaller, higher-cost producers as negatively affecting the market.

Mr Wilson said BHP would not consider holding back supply in an attempt to raise iron ore prices.

“If we pulled back our volume that volume will be filled by other companies. At the end of the day we will be penalising, in essence, our shareholders,” he said.

He would not share BHP’s predicted price for iron ore, but did not rule out a further drop.

Analysts have suggested more acquisitions and mergers are likely due to challenging market conditions, but Mr Wilson said BHP Billiton was not interested in pursuing any.

“There aren’t any companies out there at the moment that we would necessarily see as being attractive,” he said.

Representatives from Roy Hill and mid-tier miners Cliffs Natural Resources, Atlas Iron, BC Iron and Brockman Mining will speak at the conference tomorrow.