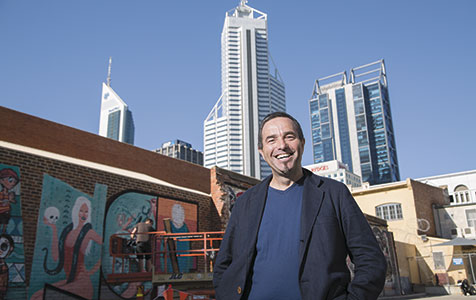 In the space of nine days, 45 national and international artists made their mark on 30 walls around the city, with the project expected to generate upwards of $1 million in spending at inner-city businesses as people visit the city to view the works.

But behind the artwork is another project intended to enhance the living and environment of social housing properties – a project majority funded by resources company BHP Billiton.

BHP has signed on as the principal sponsor of FORM’s PUBLIC Social Housing program, which is tapping into the talent of renowned street artists to invigorate Foundation Housing’s property at 100 Hampton Road.

As part of the project, in which BHP has invested $1 million, artists have been commissioned to invigorate the property from a visual perspective, both internally and externally.

A range of other programs is under way for the 190 residents at the Hampton Road property, such as workshops and events designed to build skills, self-esteem, motivation and confidence.

FORM chief executive Lynda Dorrington said creativity could be a catalyst for positive change in such a project.

“(We) share the philosophy that the best, most vibrant places to live are the ones that nurture dynamic creativity, showcase cultural diversity, insist on quality, and are shaped with people in mind,” Ms Dorrington told Business News.

FORM approached Foundation Housing with the project in mind about mid-way through 2013.

Foundation Housing chief executive Kathleen Gregory told Business News it had been considering ways to improve the lives of its residents, and FORM’s proposal for a simultaneous visual invigoration and 12-month engagement program fitted the bill.

“The people who live in Hampton Road are some of the most marginalised and disadvantaged in that community,” Ms Gregory said.

“Living somewhere that is viewed positively by the community, and also somewhere that they feel has some feel of beauty about it, we hope, will give them a greater sense of wellbeing.”

She said many of the initial results expected to emerge from the project would be intangible, but that would hopefully translate into quantifiable improvements.

“As we move through the program we are hoping to see improvements in people’s wellbeing, mental health and their capacity to find employment,” Ms Gregory said.

BHP Billiton has been a strong supporter of FORM for nearly a decade through a variety of community-focused programs.

Examples include part funding of the Canning Stock Route project, which documented oral and visual indigenous artwork and heritage.

BHO Billiton Iron Ore head of community and indigenous affairs, Richard O’Connell said the company valued the strong cultural programming that emerged from collaboration with FORM, and it was proud to support the project.

A native of Bristol, Mr Chamberlain had seen the energy created by street art festivals in Europe and wanted to explore the potential of replicating it in Perth.

FORM embraced the idea and set about making the festival a reality – although it wasn’t all plain sailing.

Mr Chamberlain told Business News the festival faced the very real threat of folding before it even fired a shot when funding remained elusive last year.

“We basically got to December and we had to make the decision of whether to proceed,” Mr Chamberlain said.

While some corporate sponsors had embraced the idea, such as Wesfarmers, Mr Chamberlain said convincing others of its worth had been a struggle.

“It’s difficult to sell things to people when they’ve not seen it before, but also because street art still is still associated with graffiti some people were a bit nervous to get engaged,” he said.

Costs associated with the event amounted to about $400,000, but Mr Chamberlain said the economic gains as a result of the artworks could be three times that as the artworks drew people into the central business district.

He said it was disappointing more corporate sponsors hadn’t come on board but said, hopefully, the success of the 2014 festival would give potential backers confidence.

“There were people who wanted to engage but for them to make the leap of faith up front was always going to be difficult; the interesting thing will be the engagement for the next one,” Mr Chamberlain said.