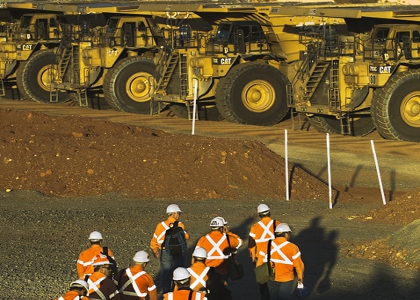 BHP Billiton's latest production figures have exceeded those announced by rival Rio Tinto yesterday, driven by record production in the Pilbara, but the miner warns that the effect strikes at its Queensland coal mines may be substantial.

The world's biggest miner reported record output from its iron ore mines the Pilbara region for the nine months to March 31 of 118.5 million tonnes (Mt).

That was up 20 per cent on the previous corresponding period despite a recent dip in volumes as a result of cyclone activity.

Production of iron ore, which accounts for much of BHP Billiton's earnings but not as much as Rio Tinto, was up 14 per cent for the March quarter compared to the same period in 2011.

Both companies are substantially expanding their Pilbara iron ore mining and export capacity.

Rio announced yesterday iron ore production that met expectations,  but output of other commodities including copper and coal was disappointing for analysts.

"Both BHP and Rio Tinto have shown an ability to offset lower iron ore prices with rising production and this needs to continue," Mr Esho said.

BHP Billiton said metallurgical coal production (for steel making) inched one per cent higher in the nine months to March 31 despite its Queensland mines being hit by industrial action and heavy rainfall.

"The extent to which industrial action will continue to affect production, sales and unit costs is difficult to predict, however with inventories now severely depleted, the impact on future quarters may be significant," BHP Billiton said in a statement.

Its coal mining joint venture with Japan's Mitsubishi, BHP Mitsubishi Alliance, earlier this month declared force majeure at at all seven of its Bowen Basin mines because ongoing strikes meant it could not meet its obligations to customers.

Thermal coal production (for electricity) rose three per cent over the nine months, although exports from New South Wales coal mines were hampered by vessel delays at the Port of Newcastle in the March quarter.

Year-to-date production of petroleum products, BHP Billiton's main point of difference to Rio Tinto, was driven 43 per cent higher by recently acquired onshore shale gas assets in the US.

The miner said it continued to adjust its onshore development plans in the US in response to lower US gas prices and expected that the liquids-rich Eagle Ford shale and Permian Basin would be its main area of activity by the end of this calendar year.

Base metals production in the nine months to March 31 were all down compared the previous corresponding period.

Unfavourable weather in Chile and planned maintenance at its Olympic Dam mine in South Australia affected copper output.

BHP Billiton said the review of its much larger diamond business, which commenced in December, was ongoing.

Rio Tinto is also considering the sale of its diamond assets, including the Argyle mine in WA.