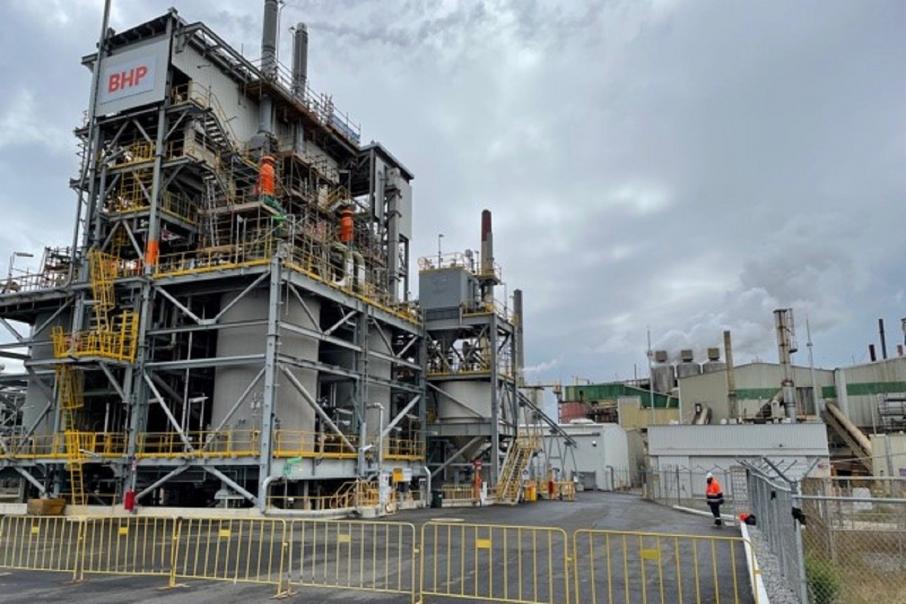 The $100 million-plus investment in the new plant is part of a major shift in BHP Nickel West’s strategy, to focus on supplying battery materials for electric vehicles.

Nickel West asset president Jessica Farrell said the new plant, located next to BHP’s long-running Kwinana nickel refinery, was the first of its kind in Australia and one of the largest in the world.

It will produce 100,000 tonnes of nickel sulphate per year when fully operational - enough to make 700,000 electric vehicle batteries each year.

Ms Farrell said the cost of developing the plant had increased substantially.

“We started with an investment of about $43 million and that has increased to just over $100 million at this stage,” she told journalists at the official opening this morning.

She attributed the increase to two factors.

Ms Farrell emphasised that the plant was still in the commissioning phase – it was expected to take about 18 months to reach full capacity.

She noted that the production plant at Kwinana had an almost identical flow sheet to the pilot plant jointly developed with CSIRO at Bentley.

The new plant will create 80 direct jobs, in addition to 200 construction jobs during the construction phase.

Ms Farrell signalled the potential for substantial growth in future.

“High quality and sustainable nickel is essential for our customers, and we expect demand for nickel in batteries will increase by 500 per cent in the next decade,” she said.

BHP said over half of the plant was fabricated in Western Australia using local skills and suppliers.

The new plant is part of Nickel West’s vertically integrated production chain that includes mines and concentrators in the Goldfields, a smelter at Kalgoorlie and the refinery in Kwinana.

The refinery produces nickel metal in the form of powder or briquettes, which is then processed through the new plant to make nickel sulphate crystals with a 99.995 per cent purity.

The nickel sulphate will be exported to global battery markets from the Port of Fremantle.

More than 85 per cent of BHP’s current production is sold to the future-battery supply chain.

He noted other developments along these lines, including the construction of three lithium hydroxide refineries and a joint venture between FYI Resources and Alcoa of Australia for a high purity alumina plant.

He also noted the government’s commitment of a $13.2 million incentive to try and facilitate the construction of cathode-active manufacturing plant in WA.

“WA is the only state to have a clear strategy supporting the development of a world-leading future battery industry that will create jobs and benefit regional communities,” he said.