BHP lining up for Glory

Perth Glory’s men's and women's sides will have a distinctive new look for the 2019-20 A-League and W-League seasons, with Australia’s biggest miner, BHP, taking over from QBE as the club’s principal sponsor. 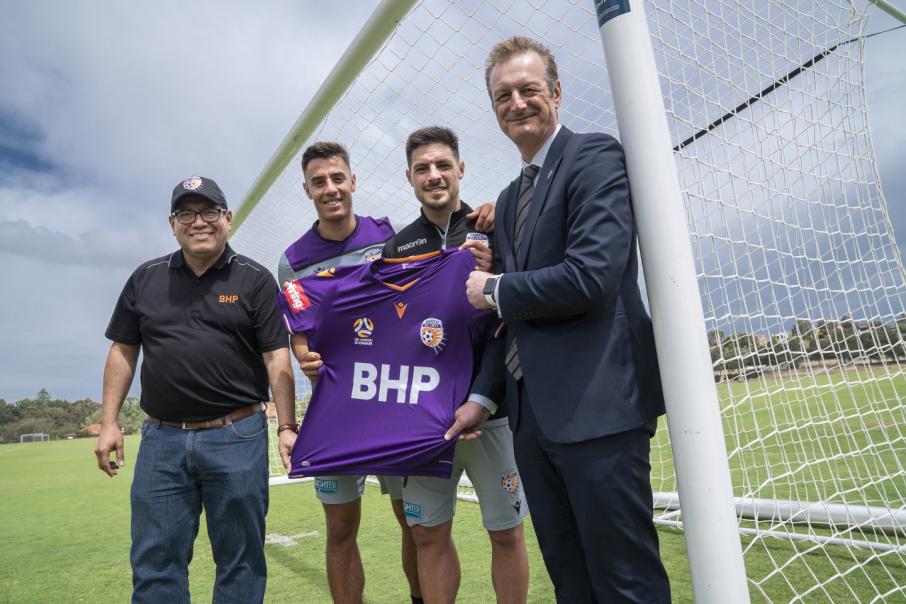 Perth Glory’s men's and women's sides will have a distinctive new look for the 2019-20 A-League and W-League seasons, with Australia’s biggest miner, BHP, taking over from QBE as the club’s principal sponsor.

BHP’s logo will take prime position on the chest of all Perth Glory’s playing shirts and training apparel, with chief executive Tony Pignata describing the partnership as hugely significant.

“BHP is a global powerhouse in the resources field and its Western Australian operations play a key role in driving the state and national economy,” Mr Pignata said.

“We are therefore extremely proud to have partnered with them and look forward to their logo being front and centre on our Hyundai A-League and Westfield W-League shirts as both teams look to build upon last season’s success in their respective competitions.”

The partnership with BHP ends QBE’s association with the Glory, with the insurance giant having been involved with the football club since 1996.

Earlier this year, QBE undertook a sponsorship strategy review and decided to increase its presence in the arts and festival space.

QBE exited its sponsorship arrangement with the Glory at the end of the 2018-19 season, with global car manufacturer Hyundai appearing on the club’s playing shirts for its prestige clash in July with Manchester United.

“QBE was associated with the club for more than 22 years and we’re grateful that we were able to give them a great sendoff by winning the Premier’s Plate last year,” Mr Pignata said.

“They’ve been great supporters of Perth Glory over the years but we understand it was a business decision that they made to move their sponsorship and look at other alternatives.

“We’re very thankful for their support over that length of time.”

He said the search for a new sponsor unearthed several possible partners, but BHP proved to be the best fit for the club.

"Sponsorship is a tough market out there at the moment - there is a lot of sporting clubs seeking major sponsors, so we’re ecstatic that BHP has agreed to come on board,” Mr Pignata said.

“Our partnership is underpinned by a mutual commitment to achieve outstanding results and greater inclusion and diversity, and we believe this approach has a positive impact on our organisations and the broader community,” he said.

In other sponsorship news, Perth Glory has secured Bendigo Bank and its North Perth branch as a club sponsor for the upcoming season.

Bendigo Bank North Perth chairman and the former mayor of Vincent, Nick Catania, was given credit for helping facilitate the tie-up.

“Mr Catania played an influential role in Perth Glory’s past and Bendigo North Perth community bank will now share in what we are confident will be its exciting and successful future,” Mr Pignata said.

Perth Glory renewed a partnership with National Storage last month, while PwC was also announced as the club’s principal corporate sponsor for its Glory in Business program in September.

A partnership with Healthway was also extended in August, with the organisation’s LiveLighter logo to feature on the A-League team’s shorts.