The professional development of Aboriginal artists in Port Hedland received a boost last week with the opening of Spinifex Hill Artists Studios. 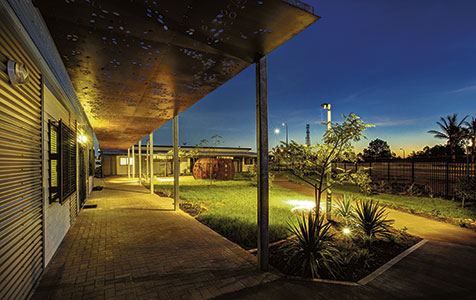 The professional development of Aboriginal artists in Port Hedland received a boost last week with the opening of Spinifex Hill Artists Studios.

With majority funding provided by BHP Billiton Iron Ore, the studio space is welcome news for the region’s only Aboriginal arts collective.

The Spinifex Hill Artists collective was formed in 2008 following a development and mentoring program run by arts advocacy group FORM.

Since then, the artists have progressed from beginner and emerging painter status to become professional artists through the sale of works, with a number winning awards.

Now, the long-term funding relationship between BHP Billiton and FORM has resulted in the mining giant providing the majority of funding needed for an arts studio, with the professional needs of the Spinifex Hill artists in mind.

The Federal Government’s Regional Development Fund also contributed to the cost of the facility, while the Department of Lands provided the land on which it has been constructed.

FORM has overseen its development.

FORM director Lynda Dorrington said establishing a permanent home for Aboriginal art development had been a long-term goal for the organisation.

“The vision to build greater capacity through the arts in the Pilbara began several years ago,” she said.

“Since then, millions of dollars worth of cultural and community programming, professional development, and improvements to the built environment have taken place throughout the region, culminating in the Spinifex Hill Artists Studios.”

FORM initiated the development and mentoring program in 2008 to offer local Aboriginal people the opportunity for social interaction and professional development through creativity.

The miner’s head of community and indigenous affairs, Richard O’Connell, said that the company was proud of the outcome.

“The opening of the new Spinifex Hill Artists dedicated premises is a significant moment, not only for the artists, but also for the whole region,” Mr O’Connell said in a statement.