BHP Billiton has signed a native title agreement with the Banjima people, calling the century-long deal one of the most significant of its kind in Australia. 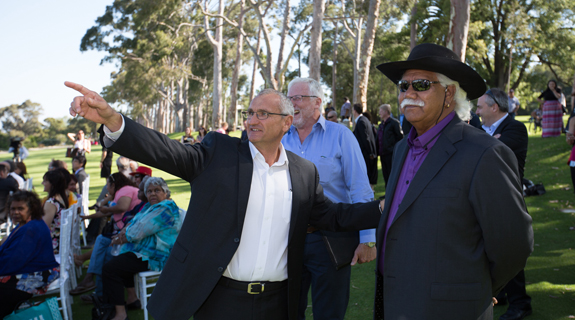 BHP Billiton has signed a native title agreement with the Banjima people, calling the century-long deal one of the most significant of its kind in Australia.

The confidentially valued agreement, understood to be worth many millions of dollars, covers more than 8,200 square kilometres in the Pilbara, including a number of the miner’s iron ore operations.

The deal has been five years in the making and involved about 1,000 people from among the Banjima, BHP, and the Yamatji Marlpa Aboriginal Corporation, which is the native title representative body for the Pilbara.

Mr Parker said it would allow the Banjima to set up a sustainable future, build infrastructure to allow people to keep living on country, protect significant areas and to preserve its culture, and set of laws for future generations.

While Banjima and BHP representatives spoke about how the agreement had engendered mutual respect, they had less to say about training and employment opportunities or support for Aboriginal business development, saying there was scope for these activities but they had not been formally decided.

It’s understood the 3,000-plus page agreement facilitates payments to the Banjima people based on BHP's iron ore production and the price of the commodity.

BHP Billiton Iron Ore president Jimmy Wilson said he was proud to move from a transaction-based engagement to an ongoing and open relationship with the Banjima.

He said he considered it a considerable accomplishment, not least because the agreement would outlast all the people involved in creating it.