BHP Billiton has responded to its mammoth interim loss and the prospect of a prolonged downturn by slashing its dividend and adopting a new management structure that leaves Western Australia without a representative in the company’s leadership group. 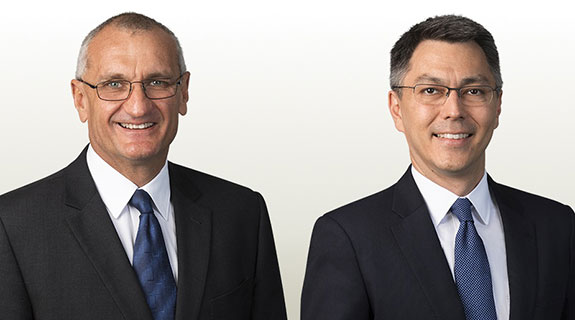 OUT: Jimmy Wilson's job has been abolished, with Mike Henry (right) taking a bigger role.

BHP Billiton has responded to its mammoth interim loss and the prospect of a prolonged downturn by slashing its dividend and adopting a new management structure that leaves Western Australia without a representative in the company’s leadership group.

The global mining giant has been hit hard by the collapse in oil, coal and iron ore prices, posting an underlying attributable profit of just $US412 million in the six months to December – down from $US4.9 billion in the previous corresponding period.

Our news editor, Mark Beyer, was interviewed by 9 News Perth the other night on BHP's huge loss...check out what he had to say if you missed it.

After adding in one-off write-downs, primarily at the US petroleum business and its Samarco iron ore mine in Brazil, the net result was a loss of $US5.7 billion.

Chief executive Andrew Mackenzie has introduced a new management structure he says will make the company more agile and its structure much simpler.

The casualties include Jimmy Wilson, who is currently the Perth-based president of the group’s global iron ore business, and Tim Cutt, who is president petroleum.

Their roles have been abolished under the new structure, which has two big winners.

Mike Henry, who currently runs the global coal business, will be in charge of all mining operations in Australia, and will be based in BHP’s Melbourne head office.

Daniel Malchuk, who currently runs the copper business, will oversee BHP’s mining operations in the Americas, and will continue to be based in Santiago, Chile.

The company’s most senior WA executive will be Edgar Basto, who has been appointed asset president WA iron ore, with effect from March 1.

Mr Basto, originally from Colombia, has been with BHP since 1989, most recently as vice-president, production mines in WA iron ore.

He will be one of six asset presidents – including Perth-based Eddy Haegel, who will continue to run Nickel West – who will report to Mr Henry.

These changes mean iron ore, which is BHP’s largest and most profitable commodity business, will be run from Melbourne.

Iron ore generated revenue of $US5.3 billion in the half year to December – or one-third of the company’s global total.

It also contributed nearly half the group’s underlying EBITDA.

WA accounted for the great bulk of BHP’s iron ore production in the past, and with the closure of the Samarco mine in Brazil, that proportion will only increase.

BHP said its WA iron ore business had cut unit costs to $US15 per tonne and indicated costs would stay at that level for the rest of the financial year.

That suggests iron ore will continue to be a solid cash generator for BHP, even if prices weaken from their current level above $US50/t.

Meanwhile, BHP has slashed its shareholder dividend and abandoned its progressive payout policy.

The move had been expected after the resources giant was forced to take a $US7.2 billion write-down against its US oil and gas assets in December and as rivals Rio Tinto, Glencore and Vale all slashed their own payouts in recent weeks.

BHP cut interim dividend to 16 US cents per share, from 62 US cents a year ago, and like rival Rio Tinto said it was dropping its long-standing policy of holding or increasing dividends at every result.

It will now ensure a minimum 50 per cent payout of underlying profit at every reporting period.

"We have not made these changes lightly. They are a determined response to changing markets that will also help us take advantage of the significant opportunities ahead," chairman Jac Nasser said.

In January, Standard & Poor's cut BHP's credit rating by a notch and warned of further cuts, raising the stakes for the company.

"The extent of the dividend cut was certainly larger than expected," Morningstar analyst Matthew Hodge said.

"It seems like they have really changed their philosophy over dividends and market outlook, but where they are now is pretty sensible."

BHP said its focus on eking out efficiencies would continue, but it will reduce capital expenditure by another $US3.5 billion in the next 18 months.

Mr Mackenzie said the prospects in commodities markets were poor.

"We expect this period of lower prices and higher volatility will be prolonged," Mr Mackenzie told reporters.

"But the markets will come back into balance in the medium term, probably starting with gas and oil, and then copper."

BHP outlined a $US1.12 billion provision against its joint venture Samarco business in Brazil - its first indication of the financial impact of the deadly dam disaster.

The company has fully written down its investment in Samarco, but Mr Mackenzie said it was too early to estimate the full financial impact. Analysts have previously indicated the accident may cost the miner up to $US3.5 billion in fines and damages.