BGC to bring Aloft to Rivervale

BGC has unveiled details of its second major hotel project in Perth, which will add a further 224 rooms to the city's growing hotel development pipeline. 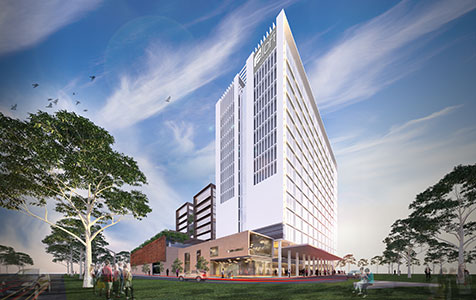 BGC has unveiled details of its second major hotel project in Perth, which will add a further 224 rooms to the city's growing hotel development pipeline.

Aloft Perth Rivervale will be the first hotel in Australia to use New York-based Starwood Hotels' Aloft brand when it opens at the Springs Rivervale precinct in late 2016.

The Aloft brand is designed to appeal to ’next-generation’ travellers, with guests able to bypass the front-desk reception by using their smartphones to check in to the hotel and access their rooms.

BGC director Julian Ambrose said the company had been impressed by the international success of the Aloft brand.

"The brand offers a modern, authentic experience that travellers have not seen in the Australian market," he said.

"Together with Starwood's proven track record and strong guest loyalty, we believe this will be another successful venture that will further develop our commercial relationship."

BGC is also planning to build a 10,100sqm office building at Springs Rivervale.

The Rivervale project marks the second collaboration between BGC's development arm and Starwood Hotels, which owns a range of leading hotel brands including Sheraton, Le Meridien and Westin.

BGC earlier this year unveiled a $500 million development plan for the old Perth Fire Station site on Hay Street, comprising a 22-storey office development with retail and food and beverage facilities, as well as a five-star Westin luxury hotel.

The office tower will add 34,500sqm of office space to the CBD, while the Westin Perth will provide a further 350 rooms when it opens in 2017.

Research by Business News has revealed the number of hotel rooms in Perth is set to grow by at least 1,400 over the next three years as a number of new developments come online.

Ritz-Carlton this week confirmed it would open a $350 million, 204-room luxury hotel at Elizabeth Quay

Planning approval for three towers of offices, a hotel and residential apartments at the Old Emu Brewery was granted in July last year, while a boutique six-star hotel is being developed at the Old Treasury Building.

The team behind Little Creatures, meanwhile, is building its boutique Hotel Alex Perth on William Street in Northbridge.

In addition, Crown is planning what will be Perth’s largest hotel, Crown Towers, as part of a larger gaming and resort expansion.