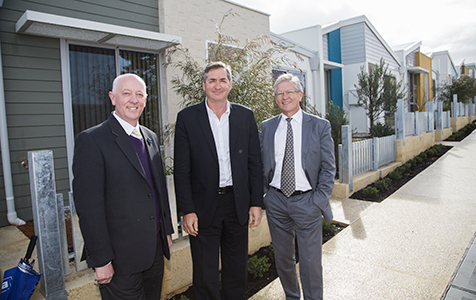 BGC Residential has launched 10 modular homes in Peet’s Shorehaven estate in Alkimos as a demonstration of what it can achieve through alternative building techniques.

The homes were built in a total of 10 weeks, eight at BGC’s factory in Canning Vale, while it took just two weeks to assemble the houses on site.

BGC Residential chief executive Kelvin Ryan said seven of the 10 homes had already sold, having been on the market for only a fortnight.

“Apart from us taking the step out and innovating, there are a lot of naysayers,” he said.

“Seven of these houses have sold, we’ve had them out for two weeks, and seven have sold, so we’re rapt with the response.

Mr Ryan said the houses, which ranged from three to four bedrooms, cost between $160,000 and $170,000 to construct, not including the cost of the land they were built on. BGC's modular homes at Shorehaven Estate, near Alkimos. A full gallery of the homes can be found here. Photos: Attila Csaszar

That construction cost, Mr Ryan said, was likely to be reduced as BGC ramped up its modular construction activities.

BGC has also partnered with the Department of Housing to roll-out a further 20 modular homes at the northern suburbs Banksia Grove estate.

Housing Minister Bill Marmion was on hand at the launch in Alkimos today, saying there were many benefits of modular housing, not the least of which was reducing construction costs.

“You can build it in the factory and truck it out, so there are a lot of savings in terms of time of construction,” Mr Marmion said.

“There can be about $30,000 in savings to the buyer (as compared to conventional construction), in terms of savings on the interest on a home loan and the time savings.”

He said alternative building techniques were an important part of the state government’s affordable housing strategy.

“We have 40,000 Department of Housing houses which are subsidised rentals, and they cost the taxpayer roughly $15,000 each every year to run; there’s a $6,000 subsidy on average for the rent, plus the ongoing maintenance costs,” Mr Marmion said.

“We need to encourage people who do have a Department of Housing house to get their own home, and those that really need a social house, that’s what the houses should be for.”

Mr Ryan said the other tangible benefit of modular construction methods was a massive reduction in the amount of waste created in the building process.

“A modular house creates 10 per cent of the waste of a conventional house, because you don’t have bulking sand either,” he said.

“During construction, you also don’t have water running on site for plastering or rendering, so the savings are significant.”

Member for Wanneroo Paul Miles said the modular construction methods ticked all the boxes of the government’s affordable housing strategy.

As reported by Business News exclusively earlier this month, Mr Ryan said he expected the market could handle up to 5 per cent of new Perth homes, which would equate to around 1,000 homes per year, to be built using modular methods.

BGC is aiming to build 500 of those homes, Mr Ryan said.

“We don’t see it as the answer to the affordable housing riddle, we see it as an answer,” he said.

“What’s happened here is Peet, BGC, the Department of Housing and Keystart have gotten together and are pursuing an initiative.”

The modular construction commitment from BGC has also enabled it to form a partnership with indigenous group Burnna Yurral Aboriginal Corporation and Peedac, to create jobs for at-risk Aboriginal youths.

Mr Ryan said 20 people had been assisted by the program so far, with ongoing training occuring at the company's factory in Canning Vale.