More than a dozen partners from BDO will wear purple bras over their corporate attire this Wednesday in support of Breast Cancer Care WA’s annual Purple Bra Day, in the hope of raising at least $10,000 for the charity’s services. 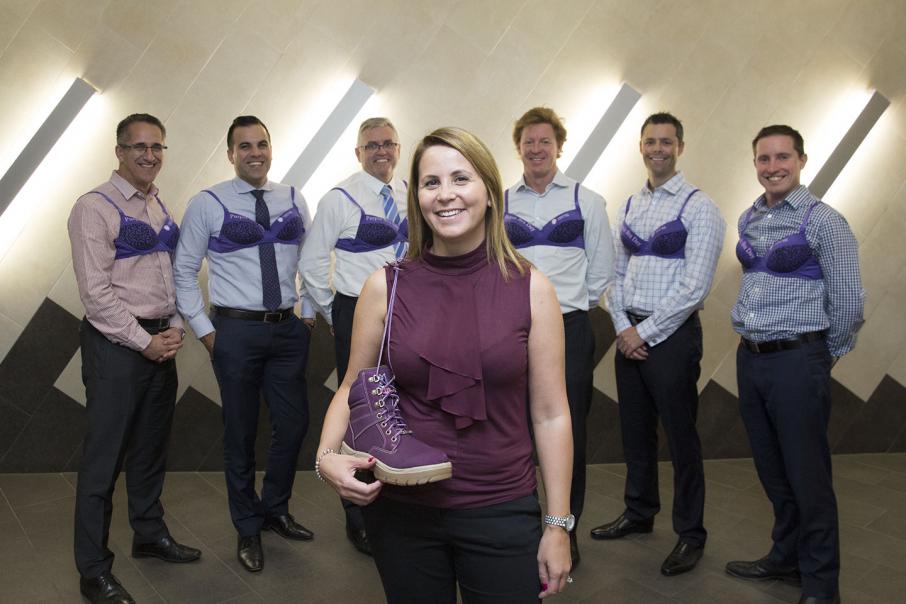 More than a dozen partners from BDO will wear purple bras over their corporate attire this Wednesday in support of Breast Cancer Care WA’s annual Purple Bra Day, in the hope of raising at least $10,000 for the charity’s services.

Counselling appointments, assisting with weekly cleaning services, dropping patients to and from medical appointments, helping to pay household bills, and providing support from breast care nurses are just some of the services BCCWA offers its clients.

Now in its 15th year, BCCWA’s annual campaign, which started in May and runs through June, will culminate this Friday, the official date for Purple Bra Day, during which volunteers will take to the streets with tins and promote breast cancer awareness in the community.

BDO corporate tax partner Jillian McCorkindale said BDO had been a long-time supporter of BCCWA, and had provided pro bono work and held fundraising initiatives in the past.

In addition to donning the bras, holding a morning tea and an auction on Wednesday morning, Mrs McCorkindale and her husband will run a full marathon (42.2 kilometres) to raise further funds.

‘‘I’ve set a target of $10,000; anything more would be excellent,” Mrs McCorkindale told Business News.

“We have a lot of employees who have been affected by breast cancer, whether it is relatives, family or personally, and many of them have used the (BCCWA) services before.

“It’s not one of the extremely high-profile charities and probably doesn’t get enough attention, but what they do is a lot more personalised and you know that what you raise for BCCWA actually goes to providing the free services they offer.”

Mrs McCorkindale said the mother of one of her staff members had passed away a few years ago from breast cancer and that BCCWA had provided a range of support services, which included delivering makeup to the mother.

“It’s often things you wouldn’t even think about, but when you’re going through that it can make such a big difference,” she said.

“We want to raise awareness that they’re out there to help people - it’s a local charity that does so much and probably the only one I’ve heard of that gets down to the ground level of speaking to the patients and their families.

One of Mrs McCorkindale’s clients, Steel Blue Boots, has also been fundraising for BCCWA for a number of years, with part-proceeds from its special range of pink and purple steel-capped boots donated to BCCWA.

BCCWA chief executive Zoe McAlpine, a 2017 40under40 winner, said the organisation did not receive any ongoing government funding and that it was only through campaigns such as Purple Bra Day that it was able to provide services free of charge to those who needed it most.

“Purple Bra Day is a time for the community to come together and fundraise in a really unique way,” Ms McAlpine said.

“We truly value the support of the WA corporate sector, with special thanks to BDO Subiaco for continuing to ‘raise the bra’ for us.

“By wearing a purple bra over their clothes our heroes are literally showing their support of Western Australians affected by breast cancer.’’

More than 17,000 Australian women are expected to be diagnosed with breast cancer in 2017, an estimated 48 a day.