Osborne Park-based BCJ Plastics has survived four decades of change in the local manufacturing industry, but sales and research manager Tim Hartung said it was a move into boutique production that helped the company flourish. 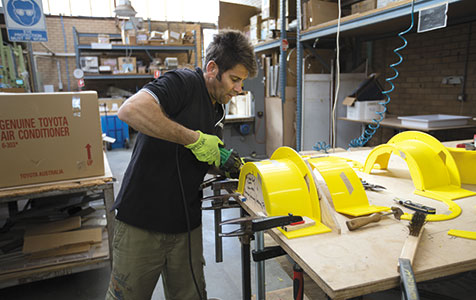 Osborne Park-based BCJ Plastics has survived four decades of change in the local manufacturing industry, but sales and research manager Tim Hartung said it was a move into boutique production that helped the company flourish.

BCJ is one of many local manufacturers to have moved away from mass production and embraced bespoke and small-scale services tailored to clients, which in the case of the Osborne Park-based business involves manufacturing a variety of plastic goods, including playground equipment, water tanks, boat and vehicle parts and healthcare products.

The plastic manufacturing market is worth about $12 million annually in Western Australia, Mr Hartung estimates, with a dozen firms competing for work.

About 80 per cent of BCJ’s business is produced by vacuum forming, a process that involves heating plastic frames and then using air pressure to mould the plastic into the desired shape.

The boutique route was a smarter strategy than mass-production, he said.

“We used to be high production but also had the smaller stuff, which really kept us in good stead,” Mr Hartung told Business News.

Technological advancement has also helped the company keep pace, with new materials that don’t expand or contract with temperature changes adding to output and quality.

“It’s evolved from hand tools, a saw and a band saw, which is basically what we started with, and now the type of work we do is completely different to what we did 15 years ago or even 10 years ago,” Mr Backsai said.

“Getting those machines has brought business in, and the quality assurance has really lifted in the last 10 years.”

“Indirectly we did do a bit for Toyota, Mitsubishi, and they’re all just winding down now,” he said.

The business encourages its employees to work closely with customers and build relationships, which Mr Bacskai said was a different strategy to that taken by most of BCJ’s competitors.

“We can have everyone from big clients, big companies, to an old gentleman off the street who wants a panel for his dog door, or a uni student who’s trying to design up something for a uni project,” Mr Bacskai said.

“It starts from a piece of paper or just a thought in their head, they may not even have a size, and (then) it’s relating with the customer to show them what we can do, to show them the materials.

“It starts from an idea.