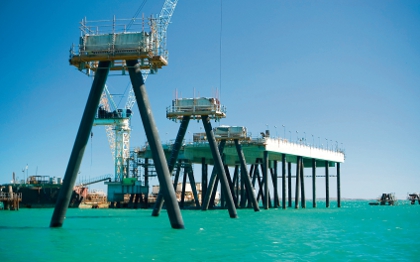 Since 1964, the BAM Clough joint venture has delivered 13 jetty projects for the energy sector.

Perth-based engineering firm Clough’s joint venture with BAM International has been awarded its third major jetty or near shore marine contract since the beginning of February, winning a $370 million deal for works on Inpex’s Ichthys LNG processing plant in Darwin.

The jetty works for Ichthys will consist of two separate vessel load-out berths to suit LNG carriers and LPG/condensate ships.

Construction is set to begin early next year, with completion scheduled for the end of 2014.

The job will employ a peak workforce of 250.

Clough said the contract took its order book since July 1 last year to around $1.5 billion.

Since February 1, BAM Clough was awarded a letter of intent for $140 million worth of separate near shore marine works for Ichthys, and a $400 million contract for jetty works at the Wheatstone LNG project in Western Australia.

The BAM Clough joint venture has successfully delivered 13 major jetty projects for the energy sector since 1964.