THE Perth Cultural Centre has been transformed this week with tents, decorations and various spectacles as part of the Awesome International Arts Festival for Bright Young Things. 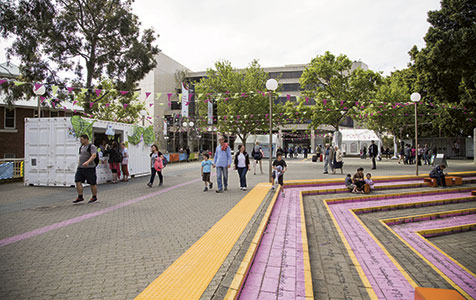 THE Perth Cultural Centre has been transformed this week with tents, decorations and various spectacles as part of the Awesome International Arts Festival for Bright Young Things.

Awesome Arts CEO and festival director Jenny Simpson said that while the awards raised the organisation’s profile for potential corporate sponsors, the process of submitting to the awards enabled it to consolidate its partnerships.

“We proactively engage with the partner in the writing of a submission, so it’s a great process of actually unpicking the partnership,” Ms Simpson told Business News.

“Once the award submission goes in, each partner has a bit more clarity around what it is they’re trying to achieve.”

The festival is aimed at children but Awesome also wants it to appeal to parents.

When selecting acts, Ms Simpson said she first considered the quality of the art, rather than its intended audience.

“A lot of the time when artists get in the mindset of making work for children they are inclined to dumb it down,” she said.

“I think it really gets back to quality and respecting the audience.”

The festival was originally due to run during the school term in November, but this resulted in a disparate audience of families and school groups, and was not sustainable

“In a general public audience you get people of all different ages, and in a school audience you tend to have a whole tent full of people who are the same age, so it’s a really different dynamic for the artist,” Ms Simpson said

The festival is funded predominantly by Lotterywest and the Department for Culture and Arts and is sponsored by Wesfarmers Arts, the City of Perth and MRA, among others.