OPINION: Over nearly two decades the 40under40 Awards have provided a series of snapshots of the state’s business sector. 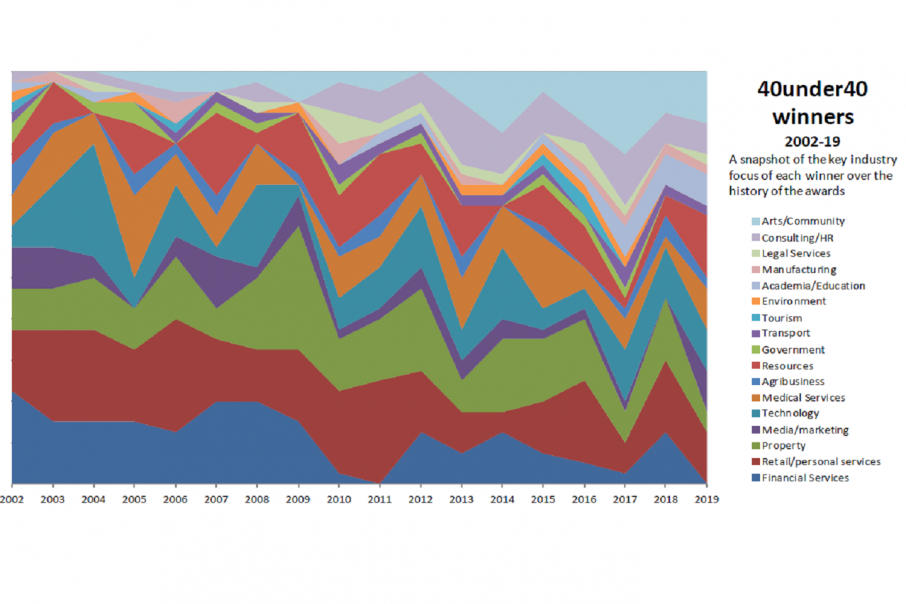 Some sectors are now acknowledged as greater than they once were, while others have settled back in the pack for various reasons.

As we celebrate another wonderful group of 40under40 winners, I have again tried to take the journalist’s version of a scientific approach to analysing the winners.

Of course it is a very subjective analysis, as many of our winners could easily fit into two categories. Take for example our First Amongst Equals winner Hannah Mann from Kimberley Pharmacy Services. A typical pharmacist could as easily be a retailer as much as they are involved in medical services. In Ms Mann’s case I chose to focus on the latter because her operation seems skewed well away from what metropolitan chemists do with their business.

What you can see very clearly in the visual representation of my sectoral choices is that, over the 18 40under40 events since 2002, the winners in the key sectors of financial services, retail/personal services and property have slipped, while the arts/community, consulting/human resources and academia/education fields have become more prominent.

It is hard to know if this reflects a real change in the business and professional communities or simply more recognition for endeavours in those fields.

Is it a bias within the application process or through judging?

Did more winners in a certain field beget more entrants the following year? In other words, is it feeding on its own energy?

Has Business News spread its wings to reach a wider community, or have we lost reach in some areas and, therefore, failed to generate nominations from previous areas of strength?

Have participants in certain sectors shied away from entering awards for any reason?

It is very likely the change in composition of our winners reflects some or all of those possibilities I mentioned. Nevertheless, it is also worth highlighting the impact of the economy, the maturing of certain business sectors, and a growing change in community views.

Success, as our 40under40 Awards has always acknowledged, is more than just a scoreboard based around some form of simple monetary success. We are looking at entrepreneurs who leverage their own skills and opportunities to benefit themselves, their families and the community.

I would suggest that over nearly two decades our view on what is deemed success has changed and is now broader than ever. We can also more readily acknowledge the economic impact of those outside pure business pursuits. And we can see what they do as entrepreneurial, albeit with a different profit motive in many cases.

Researchers making ground-breaking discoveries don’t just advance science, they actually add value to our state through the attention they attract, the leaders they bring, and the funding that follows all this.

While it is hard to put this into a ledger or come up with a simple dollar value, it is just as hard to take two equally profitable businesses and measure which has a greater social impact through the jobs they create, the wealth they generate, the intellectual property they develop and the opportunities they stimulate around them.

In the end, I don’t think it is a stretch to discern from these numbers that the contribution of some sectors are now acknowledged as greater than they once were, while others have settled back in the pack for various reasons.

I WAS intrigued to see the state’s Environmental Protection Authority make a controversial proposal that all major projects ought to be carbon neutral.

That the state government sought to hastily shut down that idea was also interesting. I hope that was due to good sense rather than a looming federal election during which such controversy could prove significant.

The EPA proposal and government reaction reflects an increasing schism in our society between environmental purists who seem fixated on cutting Australia’s emissions and those who believe a traditional focus on economic opportunity and jobs is more important.

Both fear catastrophe (including a breakdown in society) if their concerns are ignored.

As always there is some middle ground, which, if found, would be better for all of us. Conservationists ought to acknowledge that slashing Australia’s emissions is simply virtue-signalling to the world and will have no significant impact on the trajectory of climate change whatsoever.

Those on the other side ought to understand that many who advocate drastically lower emissions in the short-term are suitably immune from its economic consequences. They are either in jobs or industries that won’t feel the pain as much as many traditional ones, or, as their preparedness to sacrifice the convenience of plastic shopping bags and regular car travel shows, they are willing and able to adjust to constraints on consumption.

Somehow both sides must learn to feel, or at least understand, the other’s pain before we will find a compromise.