Autism West gets in the swim

IN the ongoing battle for funds, not-for-profit organisations are turning to niche events and away from the more traditional can-rattling approach. 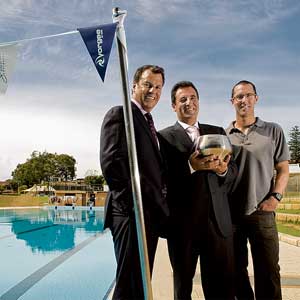 IN the ongoing battle for funds, not-for-profit organisations are turning to niche events and away from the more traditional can-rattling approach.

Within nine months of its formation, it staged a successful Team Sprint Cup, a swim challenge, which attracted 40 teams and raised more than $53,000.

It was the brainchild of Euroz Securities head of corporate finance and Autism West board member, Karl Paganin, and Olympic gold medalist, Bill Kirby.

Not unsurprisingly, Autism West is building on this initial success with another corporate swim challenge, in February, with the number of competing teams expected to double and raise more than $100,000.

A great deal was learned from last year's event and some refinements are being made for the next challenge, the most significant being a reduction in the number of swimmers in each team, from eight to six.

"Unlike the Rotto swim, participants don't have to be strong swimmers," Mr Paganin said.

"It is held in a fun, team, family and social environment while promoting and raising money for Autism West. It is also a chance for corporate Perth to race each other for the title of Perth's fastest relay team."

Each participant will swim one lap of the 50-metre pool.

The current titleholders are Mack Hall and Associates.

Mr Paganin said Autism West hoped to develop more niche events to boost fundraising, such as a walk and run, rather than asking corporates for straight-out donations.

Autism West executive officer Debra Holden, who took up her duties this week, will help develop these initiatives as part of an integrated fundraising strategy, in addition to developing the suite of services provided by Autism West.

The timing of the event, on the Sunday before the annual Rottnest Swim, is also calculated to tap into the swimming mode created by the open water classic, but offering a family-friendly and much safer environment, Mr Paganin said.

The swim challenge has some high-profile backers, with world sprint record holder Eamon Sullivan as patron and Olympic champion Duncan Armstrong the MC.

Mr Paganin said other corporate sponsors would be welcome.

All monies raised will support Autism West's ongoing work in providing support for those affected by Autism Spectrum Disorder - one in 150 Australian children.

Autism is a lifelong neurobiological disorder that affects the development of social interaction, communication and play. It occurs in all racial, ethnic and social groups and is four times more likely to affect boys than girls.

The 2009 iiNet Team Sprint Cup will be launched at the Claremont Hotel on Thursday November 20 at 6pm, and held on February 15 2009 at Christchurch Grammar School's swimming pool in Queenslea Drive, Claremont.